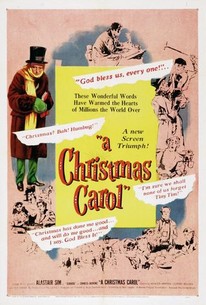 Critics Consensus: The 1951 adaptation of Charles Dickens' timeless classic is perhaps the most faithful film version -- and Alastair Sim's performance as Scrooge is not to be missed.

Critics Consensus: The 1951 adaptation of Charles Dickens' timeless classic is perhaps the most faithful film version -- and Alastair Sim's performance as Scrooge is not to be missed.

Critic Consensus: The 1951 adaptation of Charles Dickens' timeless classic is perhaps the most faithful film version -- and Alastair Sim's performance as Scrooge is not to be missed.

Widely considered to be the definitive of the many film versions of Charles Dickens' classic novel is this 1951 British adaptation, starring Alastair Sim (entitled "Scrooge" in its U.K. release). Sim plays Ebenezer Scrooge, a London miser who, despite his wealth, refuses to make charitable contributions and treats his sole employee, Bob Cratchit, as an indentured servant. On Christmas Eve, Scrooge is visited by the ghost of his late business partner, Jacob Marley, who was as selfish as Scrooge in life and has been condemned to an eternity of wandering the Earth in shackles. Marley informs Scrooge that he's to receive a trio of spirits that night who will take him on a journey through Christmases Past, Present, and Yet to Come. As Scrooge encounters each apparition, he is taken on a tour of his life and realizes what a wretch he is, transformed by greed from an idealistic youth into an embittered ogre. Infused with a new, cheery outlook, Scrooge sets about earning his redemption. ~ Karl Williams, Rovi

Brian Worth
as Fred

Michael Dolan
as Ghost of Christmas Past

Critic Reviews for A Christmas Carol

Watching most versions, the viewer is tempted to punch happy Scrooge. Here we yearn to share a sherry with the newly jolly rogue.

Lashings of festive cheer and a fair dollop of fine performances will leave you in the mood for mince pies and a renewed sense of seasonal goodwill to all men.

A sturdy 1951 British mounting of the Dickens tale, with Alastair Sim contributing a definitive Scrooge.

Other Christmas Carols need not apply.

The cinematography is uniformly strong with gorgeous shadows, lighting and atmosphere.

All depends, therefore, in the making of a film from this story, on the re-creation of this atmosphere in dramatic terms. It cannot be said that Brian Desmond Hurst has been altogether successful in this respect.

This faithful adaptation of Dickens' A Christmas Carol is a rare beast indeed, a genuinely affecting melodrama.

This is easily the best screen version of the much loved yuletide tale.

This film, and Alastair Sim's performance as Scrooge in particular, so perfectly captures Dickens's novella that all other versions feel redundant.

Audience Reviews for A Christmas Carol

It's a classic. The performances are wonderful and the atmosphere is suitably eerie and memorable. It loses a few points, though, for dragging in the middle, but besides a dip in energy, the film still resonates with all who see it as a beautiful and timeless achievement.

Perhaps not a definitive version, as there never could be one for this story. However, this is probably the most well rounded version. Great performances, especially from Sim, help to create a believable and emotionally taxing experience. The other high point of this film are the bits that are added. The book is expanded upon, with earlier scenes of Marley and Scrooge including an embezzling scam that shows their ruthless business technique. It all makes for a dense and almost perfect adaptation.

many still consider this the definitive film version of a Christmas carol, and in many ways it still is. alastair sim is brilliant as srooge, doing a great job of selling each emotion and change of perspective. despite this films reputation as the definitive version, its surprising that this version also adds more to the story than most versions. especially during the visions of scrooges past, this film contains quite a few scenes not found in the novel or any other film version, thankfully each of the additions work really well to create a complete and compelling version of this wonderful story.

this movie made me incomparably happy. christmas classic.