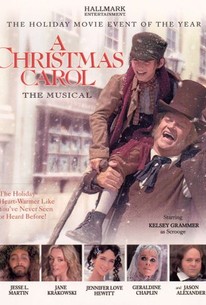 Differentiating this TV-movie version of Charles Dickens' A Christmas Carol from the hundreds of other adaptations of the same Yuletide classic is its tongue-in-cheek ambience and a bundle of memorable tunes by perennial Disney composer Alan Menken and former Schoolhouse Rock lyricist Lynn Ahrens. Inspired by a stage musical which used to be presented annually at New York's Madison Square Garden, this Christmas Carol stars Kelsey Grammer as tight-fisted Ebenezer Scrooge, who sees the errors of his ways just in time to oversee the "best Christmas ever" for his long-suffering clerk Bob Cratchit (Edward Gower) and "God Bless Us Everyone" Tiny Tim (Jacob Moriarty). On this occasion, the spirits materializing for Scrooge's benefit include Jason Alexander as a neurotic Jacob Marley, Jesse L. Martin as a laid-back Ghost of Christmas Present, Jane Krakowski as a sexy Ghost of Christmas Past, and Geraldine Chaplin as a spooky Ghost of Christmas Future (in Wizard of Oz tradition, three of these four actors also appear as "real" people in Scrooge's everyday life). Highlights include the song "Link by Link," wherein the ghostly Marley and a chorus of wraiths perform a lively ball-and-chain dance number, and the outsized Christmas celebration in the home of Scrooge's first boss, Mr. Fezziwig (Brian Bedford), which features among other things a "pole dance" by the Ghost of Christmas Past! Filmed on-location in Budapest (which sort of looks like Dickensian London if you squint real hard), A Christmas Carol: The Musical won an Emmy award for musical director Michael Kosarin -- and, alas, tanked in the ratings when first telecast by NBC on November 28, 2004.

Critic Reviews for A Christmas Carol

All of the singing is excellent.

Audience Reviews for A Christmas Carol

This movie is just decent. Musical versions of the story have been done better. Just watch Muppets Christmas Carol or the Albert Finney Scrooge. Kelsey Grammer just looks like...Kelsey Grammer with long hair. They didn't bother trying to make him look any older. Plus come on, Jason Alexander as Jacob Marley ?? He tries to be spooky but sorry he's still the worse Jacob Marley I ever seen.

There are bits of acting that I liked but some of it felt a little flat. There were only a few of the songs that were good and the others were all over the place. Grammer was fine as Scrooge and he looked the part fine. It's a tough role for any actor since the roles has been done so many times that it has become stale in our minds. It's hard to bring something new to the table with a character that is so iconic. This was fine for tv but there are other versions that are far better out there for you to see.