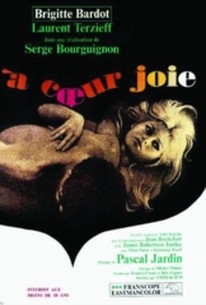 Too old to be a gamine yet not old enough for matronhood, Brigitte Bardot is the ideally cast leading lady of Serge Bourguignon's Head Over Heels. Bardot plays a thirtysomething beauty who finds herself torn between two desirable lovers. The film's alternate English-language title, Two Weeks in September, symbolically conveys the ambience of the film: Bardot is loved by a man much older than herself, and in turn falls in love with a man much younger than herself. All of the characters are old enough to know better than to enter into a menage a trois, yet this little fling may be the last chance for true happiness for at least two of the participants. Director Bourguignon collaborated on the bittersweet script of Head Over Heels, which was originally released in France as A Coeur Joie. ~ Hal Erickson, Rovi

There are no critic reviews yet for À coeur joie (Two Weeks in September). Keep checking Rotten Tomatoes for updates!

There are no featured audience reviews yet. Click the link below to see what others say about À coeur joie (Two Weeks in September)!