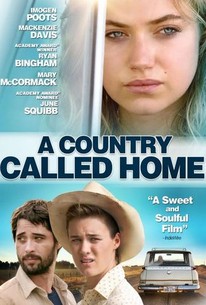 A COUNTRY CALLED HOME tells the story of Ellie (Imogen Poots), a young woman living in Los Angeles who learns that her estranged alcoholic father has died. Having had no contact with him since childhood, she's reluctant to make the effort to attend his funeral, but something draws her to the dusty corner of Texas where he spent the last years of his life. At first dismayed by the small town vibe, she's soon intrigued by the people she meets, among them a distraught stepmother, her apprehensive son, a gutsy young musician, and a set of doting grandparents she's never met. As she finds glimpses of the father she once knew, she also discovers a new attitude towards friendship, loyalty, and family.

Tatiana Panovich
as Mom at DQ

William C. May
as Kid at DQ

Jessica Schwartz
as Waitress
View All

The gentle drama A Country Called Home is in sync with its small-town Texas setting. Unfortunately, much of it is also as flat as the terrain, despite the efforts of an engaging cast led by Imogen Poots.

It's refreshing to see Poots in a role such as this, one that lets her easygoing charm shine through.

The third act in particular becomes an awkward mixture of broad comedy and pathos.

There's exactly one fascinating, original character in Anna Axster's well-meaning but bland debut feature, "A Country Called Home." Unfortunately, the movie's not about him.

There is not a lot in the plot that is surprising or even original. There is some wit and there is a not too unrealistic look at strained family relationships.

A Country Called Home is a decent enough trip through the back roads of Texas, connecting with a partly dysfunctional family. It's just not something that most viewers will want to write home about.

While I found it sincere, I felt like it meandered too much and suffered from anxiety over what kind of a film it wanted to be.

Lacks the clear vision to know how to distinguish itself from a hundred other similar movies.

There's heart here for the taking, but Axster turns a complicated domestic and emotional crisis into an episode of a network television drama.

Sturdy, well-acted, but a mostly dull and unsurprising "You can't go home" melodrama.

There are no featured audience reviews yet. Click the link below to see what others say about A Country Called Home!