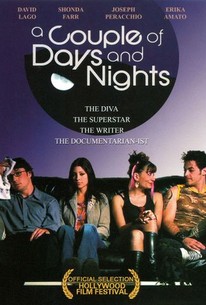 A singer, a wannabe starlet, a trust fund baby, and a documentary producer all try to maintain their dignity while struggling to get by in the ultra-commercialized reality that is early-21st Century Los Angeles. Sultry singer Julie longs to land a boyfriend with the perfect "Greek-Roman profile" and find a singer whose talent she deems to be on the same level as her own. Micah is fully confident that she is about to become the next single-name megastar, yet despite having achieved any level of success she's already got the expensive tastes to prove her credibility. Scott may have been born with a silver spoon in his mouth, but the pressure of carrying on the family business has left him unable to form his own opinions. Lastly, Rhonda doesn't really fit into any category, though she longs to document her strange journey for hopes that she might transcend her own limitations. In a town where dreams can either drive you or destroy you (sometimes both at the same time), these four creative souls will soon discover precisely what it takes to remain afloat in a town where the waters can be particularly rough.

Critic Reviews for A Couple of Days and Nights

There are no critic reviews yet for A Couple of Days and Nights. Keep checking Rotten Tomatoes for updates!

There are no featured reviews for A Couple of Days and Nights at this time.

A Couple of Days and Nights Quotes