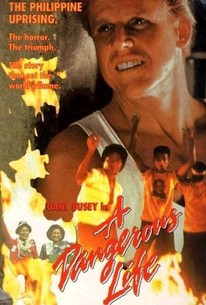 Dangerous Life originated as a six-hour HBO miniseries about the 1986 Philippine revolution. Gary Busey stars as an American TV journalist, on the scene when the tempestuous situation in Manila boils over. He puts his own life on the line to get the inside story of the overthrow of the Marcos regime. By its very nature, most of the film had to be shot everywhere but the Philippines. Since its original 1988 HBO run, A Dangerous Life has been edited down to a 162-minute TV movie.

Critic Reviews for A Dangerous Life

There are no critic reviews yet for A Dangerous Life. Keep checking Rotten Tomatoes for updates!

Audience Reviews for A Dangerous Life