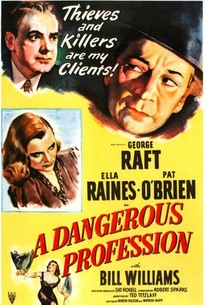 In this mystery, a bailbondsman has just fallen in love with a woman who has just informed him that she is married to a convict, jailed for embezzling. She hopes that her lover can help her scrape up enough to free him. It seems that when she became involved with the bondsman she had been separated from her hubby. Now that time has passed, she has decided to go back to him. The bondsman's partner thinks he is crazy for wanting to put up the money. But love is blind, and the man does it. Unfortunately, the woman is killed. The bondsman begins looking for the murderers and encounters a grizzled detective who is also looking for them.

Frank Shannon
as Barman
View All

Critic Reviews for A Dangerous Profession

There are no featured reviews for A Dangerous Profession at this time.