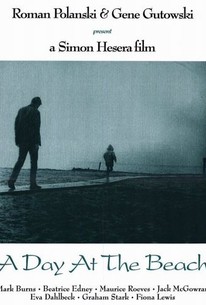 A Day at the Beach Photos

Roman Polanski wrote the screenplay for this decidedly offbeat drama. Bernie (Mark Burns) plays a rootless wanderer with a fondness for alcohol and no clear goals in life. Bernie stumbles into a seaside resort community with Winnie (Beatrice Edney), a young girl in leg braces, in tow. As Bernie starts hitting the bottle, his physical and emotional stability starts to crumble, and Winnie begins to worry for his safety, until he finally collapses and Winnie panics, with no one left to look after her. Peter Sellers makes a brief cameo appearance as a gay shopkeeper who sets up a booth to take advantage of the beach traffic. While Polanski originally intended to direct A Day At The Beach, he later turned over the reigns to filmmaker Simon Hesera; it was his first dramatic feature, and his last.

Graham Stark
as Pipi
View All

Critic Reviews for A Day at the Beach

...a bitter, aggressive film that mirrors the fecklessness of the main character...

What could be one of [Roman] Polanski's trademark alienated creatures comes off as little more than a pathetic, self-pitying jerk under Simon Hesera's direction.

There are no featured reviews for A Day at the Beach at this time.

A Day at the Beach Quotes