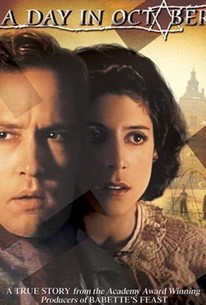 A Day in October Photos

Shot on location in Denmark, this riveting and inspirational WW II-era drama chronicles the courage of a young Jewish woman who risks her life and that of her family by concealing a wounded resistance fighter in their home in 1943 just prior to the Nazi invasion of Denmark. The girl eventually falls in love with the wounded man. After he heals, he and the other freedom fighters help the imperiled Danish Jews flee to the safety of Sweden.

Critic Reviews for A Day in October

There are no critic reviews yet for A Day in October. Keep checking Rotten Tomatoes for updates!

Audience Reviews for A Day in October

This film has all the hallmarks of a made-for-TV movie: poor lighting, low-budget soundtrack, episodic structure, decent but underwhelming performances. If it had been, it wouldn't have been made for prime time. It's pleasant and mildly pleasing -- somewhat like paisley wallpaper or floral-print socks. Watch it or don't. You won't remember the next day whether you did or didn't.

A Day in October Quotes