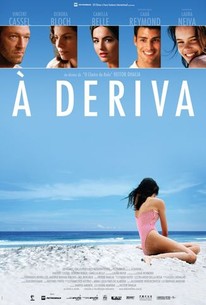 A teenage girl steps over the line into adulthood during a summer abroad in this drama from writer and director Heitor Dhalia. Mathias (Vincent Cassel) is a successful French novelist who packs up his family, including wife Clarice (Debora Bloch) and fourteen-year-old daughter Filipa (Laura Neiva), for a few months of vacation at a beachfront house in Brazil. While their surroundings are idyllic, not everyone is happy, and Filipa is aware of the obvious tension between her bickering parents. The contentious relationship between Mathias and Clarice explodes when she learns that he's been unfaithful with the younger and sexier Angela (Camilla Belle). Filipa, who is all too aware of her growing attraction to the opposite sex, is at once disturbed and excited when she spies Mathias and Angela making love, and she decides to act on her desires for a handsome neighbor in his early twenties. A deriva (aka Adrift) was an official selection at the 2009 Cannes Film Festival. ~ Mark Deming, Rovi

The shores of Buzios in Brazil beckon in a drama about infidelity and sexual awakening which mainly settles for being easy on the eye.

The tale is told competently enough, but the central relationship between the parents, Clarice and Mathias, is unsatisfying...

Dhalia gives the film a glossy sheen (with the slightest undercurrent of Oedipal tension), but Adrift never really moves beyond the tale of one little rich girl's awakening.

The film's biggest problem is its repetitive, meandering script, a catalogue of coming-of-age clichés -- the first date, the first kiss, the first sip of booze -- that can't find anywhere new to go.

Vincent Cassel is in typically commanding form, showing off his surprising mastery of Portuguese, in a thoughtful and beautifully shot movie about love, lust and growing up.

Less a proper coming-of-age movie than a posh version of Home And Away.

Brazilian director Heitor Dhalia's third feature film, is a sensuous coming-of-age story as well as an ode to the Brazilian beach landscape of Buzios and the band of gorgeous bikini-clad teenagers who run wild in it.

Elegantly scripted, elegantly acted and elegant looking, by avoiding obvious dramatic fireworks, Adrift turns out to be a slow-burning, coming of age sparkler.

The film may lack edge but it is always engaging.

Does the film say anything new? No. And does the story transcend its gloomy premise with a taut narrative? Nope.

While it may not tell us anything new about the human condition, it is beautifully shot and impeccably acted, especially by screen newcomer Neiva.

After his masterpiece Drained, Brazilian director Heitor Dhalia went on to make this third feature film, which strays from his usual narrative style and ventures into something more sober - only this time he seems to have plagiarized New Zealander film Rain.

To its credit, "Adrift" succeeds more by what it does not do than what it seeks to do, taking its time during an endless summer at a beach community in Brazil. Of special interest are the beautiful scenery and Vincent Cassel, cast against type and speaking Portugese. Unlike most of the other characters he has played, Mathias is quite domestic as a writer on vacation with his family. That's not to say that Mathias is without his share of danger signs, most of which emanate from his never having fully grown up. That sense of irresponsibility has led his wife Clarice(Debora Bloch) to drink as they argue about a possible adaptation of one of his works and eventually the logistics of a possible separation. While their son gets into a fight, it is their oldest, 14-year old Filipa(Laura Neiva), who is most conscious of what is going on around them. This is especially important because she has reached an age where she is taking an interest in boys for the first time, namely Artur(Daniel Passi) who faces an impossible question during a round of truth and dare. Not having the experience to know what the signals mean, she does not have the answers. But even worse, she has no questions.

A fourteen-year-old discovers her father's infidelity and her own sexuality. Adrift is a slow but striking film. We watch Filipa's every step with a feeling of impending doom, and Laura Neiva gives an inscrutable performance. Vincent Cassel, whose work is always compelling (even as he upstages big Hollywood stars in Oceans 13), turns in another phenomenal performance, a tour de force, nuanced character, in yet another language. The weakness of the film is its story, which, in the final analysis, doesn't amount to anything new. Yes, Mathias's reaction to the final scene is different than the cliches we're used to (and oh so European), but that's about all that sets this coming-of-age story apart from all the others. Overall, I enjoyed Adrift, as I sat tensely throughout the film, but after I thought about it, I realized I didn't see anything original, so Adriftbecomes an old film done very well.

A quiet contemplative film that explores the tensions of a husband and wife splitting up over the course of a summer holiday and how that dynamic affects the children, who don't understand what is happening. Lots of lovely scenery, young, nubile bodies, and and some solid acting mark this film. Laura Neiva, as Philipa, the oldest girl, is quite lovely and gave a strong performance. Vincent Cassel and Debora Bloch played her parents and Camille Belle was the love interest for the father. All is not as it seems however and when the true reason for the breakup comes out it does manage to surprise, at least a little. One has to wonder how many bathing suits a young girl like that might own, as it seems that Philipa never wears the same one twice.