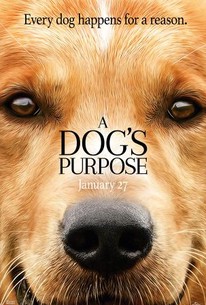 "A Dog's Purpose" shares the soulful and surprising story of one devoted dog who finds the meaning of his own existence through the lives of the humans he teaches to laugh and love.

Dan DeJaeger
as Father at Shelter

Anita Daher
as Mother at Shelter

Reine Lecuyer
as Daughter at Shelter

Rayna Ens-Armstrong
as Daughter at Shelter

Tyson Wagner
as Boyfriend in Park

Critic Reviews for A Dog's Purpose

This remains a textbook example of what the website Snopes.com refers to as "glurge" -- the kind of gooey uplift associated with the novels of Nicholas Sparks and their film adaptations.

It's hard not to be charmed by the film's pack of hyperactive, wriggling puppies, but there's only so much time to be spent watching them play before it becomes eye-wateringly banal.

While the canine performances are impeccable in A Dog's Purpose, this family movie is more of a dog's breakfast in terms of construction and tone.

This film has drama, humour and pathos.

Innately sweet, due to the high number of fluffy animals, but it has the gloopy emotion and silly plotting of a Nicholas Sparks novel. Nicholas Barks, if you will.

Lasse Hallström once again provides theater-goers with some food for thought in A Dog's Purpose. Of course, the food tastes better out of the trash and bacon from under the table is just the best.

It's a safe family film that's a heart tugger for dog lovers.

The problem with that premise is you have to watch a dog die 5 times, which is like Marley and Me times 5.

This film fails to earn a single emotional reaction of its own merit. Instead it preys on sadness offering little in return but misery and saccharine sentimentality.

David Brake
One Room With A View

A Dog's Purpose is a movie with a good heart telling a well-intentioned story, but the constant tugging of heartstrings ultimately results in a fraying that significantly lessens the overall impact of the film.

Audience Reviews for A Dog's Purpose

Great movie, but I am never watching it again. The dog dies several times and the scene with the cop devastated me. Not just a few tears, literally bawled in public. Anyone whose ever loved a dog is likely to cry! Very well made and good acting. I didn't realise this director did Hatchi as well. That figures. I cried in that one too! Not like this though. Surely a dog shouldn't die more than once per movie!!!

In the opening moments of the latest sun-drenched melodrama from director Lasse Hallström (Chocolat, Hachi: A Dog's Tale) a dog is born and just quickly a dog is euthanized. It's a strange way to open a PG-rated family film about man's best friend, but was apparently the best way to set the stage for a film whose premise is that of dog reincarnation as narrated by Olaf from Frozen. Sound strange? It is, a little bit, but not nearly as bad as you might think though not nearly as effective as it should be either. This is taking into considering the fact the writers/producers and Hallström don't shy away from exploiting what is arguably the easiest way to elicit tears from your audience-a dog dying. They do this at least four times. And yet, through each of these segments, each of these lives that we see different breeds and genders of dogs lead (all voiced by Josh Gad) there is never that moment that just breaks you in the way you expect a movie like this to do. It seems there was no hesitation in doing what it takes to get the audience to that point, but the execution never matches the intention thus making A Dog's Purpose more of a sleeper than the quickly euthanized pup we met in the first scene. read the whole review at www.reviewsfromabed.com

Children will have no problem with A Dog's Purpose, but adults who have better things to do will just look at the screen with a bored face wondering when is this going to end. Adults in general should look for a film that's worth seeing. Great movie to place children while watching your average R-rated movie.