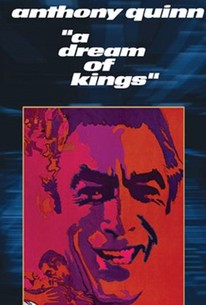 A Dream of Kings Photos

Anthony Quinn plays Matsoukas, a Greek/American ne'er do well, living in Chicago with his long-suffering wife Caliope (Irene Papas). When Matsoukas discovers that his son (Radames Pera) is dying, he decides that the boy needs to get out of the Windy City and recuperate in the more agreeable climate of Greece. All he needs is the money for the plane fare. One by one, Matsoukas' sources of income dry up until he is forced to fix a dice game in order to raise the cash. It is his wife who finally puts up the money by stealing from her own mother. Matsoukas makes the trip but realizes it would be better if he remain in Greece so as not to further humiliate the loyal Caliope. Inger Stevens co-stars as Quinn's mistress, while Sam Levene plays an old pal whose offer to put up the needed money evaporates when he suddenly drops dead. A Dream of Kings was adapted by Harry Mark Petrakis from his own novel. ~ Hal Erickson, Rovi

George Michaelides
as Doctor in Church

Critic Reviews for A Dream of Kings

There are no critic reviews yet for A Dream of Kings. Keep checking Rotten Tomatoes for updates!

There are no featured reviews for A Dream of Kings at this time.

A Dream of Kings Quotes