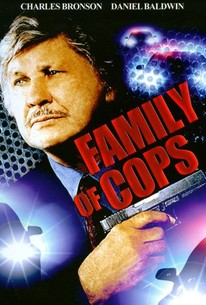 In this made-for-TV thriller, Paul Fein (Charles Bronson) is a veteran police detective whose son Eddie (Sebastian Spence) is also a cop. Paul is assigned to investigate the murder of a prominent businessman, and he soon learns that the field of suspects has been narrowed down to two -- the victim's sexually freewheeling wife Anna (Lesley-Anne Down), and Paul's wild-child daughter Jackie (Angela Featherstone). Neither Paul nor Eddie believe that Jackie could have committed the murder, and soon Paul is using himself as a decoy in a bid to find out more about what Anna does and doesn't know about her husband's death. Family of Cops was followed by two sequels.

Lesley-Anne Down
as Anna Novachek

Caroline Barclay
as Celia
View All

Critic Reviews for A Family of Cops

There are no critic reviews yet for A Family of Cops. Keep checking Rotten Tomatoes for updates!

Audience Reviews for A Family of Cops

Charles Bronson had the very knowledge to play those tough characters and made me fear in his roles.

Charles Bronson is okay as a police commander investigating a murder involving his daughter, but this suspense-drama lacks conviction.

A Family of Cops Quotes