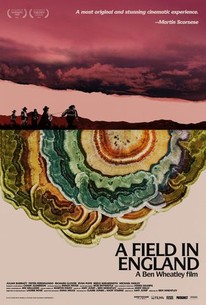 Critics Consensus: Recklessly assembled and occasionally compelling in spite of itself, A Field in England showcases a singularly brilliant voice in British cinema.

Critics Consensus: Recklessly assembled and occasionally compelling in spite of itself, A Field in England showcases a singularly brilliant voice in British cinema.

Critic Consensus: Recklessly assembled and occasionally compelling in spite of itself, A Field in England showcases a singularly brilliant voice in British cinema.

A Field in England Photos

England : 1648 AD. A small group of deserters flee from a raging battle through an overgrown field. They are captured by two men: O'Neil and Cutler. O'Neil, an alchemist, forces the group to aid him in his search to find a hidden treasure that he believes is buried in the field. Crossing a vast mushroom circle, which provides their first meal, the group quickly descend into a chaos of arguments, fighting and paranoia, and, as it becomes clear that the treasure might be something other than gold, they slowly become victim to the terrifying energies trapped inside the field. (c) drafthouse

News & Interviews for A Field in England

View All A Field in England News

Critic Reviews for A Field in England

Laurie Rose, Wheatley's regular DP, brings to the film the same charged feel for landscape he so potently demonstrated in Sightseers.

It's the English Civil War on magic mushrooms!

It's about shifting power games, mostly, and suggests a period film made by Samuel Beckett in one of his more playful moods.

It's dementia for its own sake, an empty head-trip.

An extremely confusing feature saddled with a script filled with non-sequiturs and giant-sized plot holes.

Field in England feels like it was tossed off as a quick project rather than something carefully made.

It's admirable that Wheatley's attempting to tap into an idea of Englishness with his merging of a civil war backstory to notions of landscape and England's rural-social past.

For all its drawbacks, A Field in England is undoubtedly best on the big screen -- if just for its striking visuals and memorable oddities.

A Field in England becomes a film that necessitates and acquired taste to appreciate it. That being said, if you have enjoyed any of Wheatley's films to date you should check out this one as well.

Audience Reviews for A Field in England

Four men walk over a field in 17th century England, in black and white. What follows is weirdness. While some frames are really beautifully filmed, other parts are so trippy you think you're in a music video. Even though it's no long film, it sometimes feels like it, and yet there is an odd fascination for what's going on up until the bloody finale. You're left to make up your own mind about what all the fuzz was all about. The beautiful end credits song makes you think you've seen a much better film than it actually is. File under: artsy fartsy or What the hell did I just watch?

A waste of time. Of memory. Of thought. A waste. A refutation of the idea of Anglo dominance in film, indeed, the very argument against that theory. And yet so well thought of? I don't get it. If one has access to magic mushrooms my advice would be to do those instead.

A pointless exercise in pointless nothingnes. Seriously, critics are bashing Only God Forgives and praising this? Go figure.

Bizarre and arresting at times, but also audacious and thought-provoking, Ben Wheatley's latest film ultimately works because of its mood, visual style and performances.

A Field in England Quotes