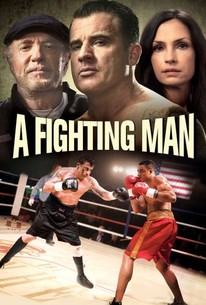 Critic Reviews for A Fighting Man

Irish guilt, redemption, opportunism, alcoholism ...writer/director Damian Lee puts all across with about as much nuance as a bruising left hook.

Lee has drawn nicely underplayed performances from everyone, and there's probably an affecting movie somewhere in all its stories. As it is, A Fighting Man is a boxing film with a particular problem: It can't fill its broad canvas.

Audience Reviews for A Fighting Man

I have no idea why is this Canadian film listed on RT as a 2013 film when it was released in Canada on 25 April 2014, and I am not aware of any pre-screening in other countries. A Fighting Man is a sport drama written and directed by Damian Lee, and I really enjoyed it's interwoven story-telling style during the 5 rounds of the boxing match. It stars Dominic Purcell, James Caan, Louis Gossett Jr., and Famke Janssen, and it is well underrated regarding their performances! The story of Sailor O'Connor (Purcell) , a retired Irish boxer, who has not once been knocked down in the 63 matches he's fought, was loosed at places, and overflew few times into the melodramatic surroundings... still, it was brought back on time by the director. I really felt for a man who was a long way from his prime but he does not want to turn away when an opportunity arises for him to lace up his boots and take on a young boxer by the name of King Solomon (Smith). With his mother dying from cancer he wants to take her once more to Ireland, and the boxing money would be enough for the trip, even if he is not a winner. While those around him try to talk Sailor out of it, he rounds up his old training team. Fit but aged team Sailor, Brother Albright and Max (Caan and Ironside) are coming together for one last battle. Enjoyable but bloody and sometimes watered down by too many stories running.

An extraordinary and breathtaking movie. It's a powerhouse knockout. One of the best and most powerful boxing films since The Fighter. A well-nuanced, character driven and vividly told movie that balances all its stories nicely and keeps surprising you around every corner. A strong, compelling and heartfelt piece of work from Director, Damian Lee. Lee has a solid script and gets the best performances he can from his brilliant all-star cast. Dominic Purcell gives an excellent and heart-wrenching performance. James Cann and Kim Coates are terrific. Famke Janssen is wonderful, shes gives one of her best performances in years. An excellent drama, I loved it. As a fight fan and a film fan i got exactly what i wanted from it. A beautiful character story about tragedy and triumph. A new favorite to my list.