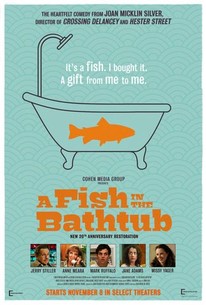 A Fish in the Bathtub Photos

After four decades in show business, the husband and wife comedy team of Jerry Stiller and Anne Meara finally make their big-screen debut together in this story about a marriage on its last legs. Sam (Stiller) and Molly (Meara) have been married for over 40 years. Their children are grown and living on their own, and the romance has drifted out of their relationship; arguing has become their favored method of communication. But the bickering goes too far when Molly asks Sam to get rid of the carp he's keeping in the tub in their guest bathroom. Sam informs Molly that if she doesn't like the fish, she can leave -- and Molly takes him up on the offer, moving in with their son Joel (Mark Ruffalo). This is hardly good news for Joel, who is having problems with his wife and feeling tempted to stray by an attractive blonde at work. Meanwhile, Sam and Molly's daughter Ruth (Jane Adams) tries to convince her father to win back her mother, but Sam receives some surprising competition when Molly starts dating an old friend named Lou (Bob Dishy).

Critic Reviews for A Fish in the Bathtub

A nice change of pace, with a genuine chemistry between the two leads.

Audience Reviews for A Fish in the Bathtub

Jerry Stiller played his role so well that there were times I wanted to reach through the screen, shake him & ask him "What the hell's wrong with you" If they gave out an Oscar for Best A**hole in a movie, Jerry Stiller should've won.Maybe this movie was so good because it had a real life husband & wife team.When Sam & Molly were fighting, You could feel the tension in the air

A Fish in the Bathtub Quotes