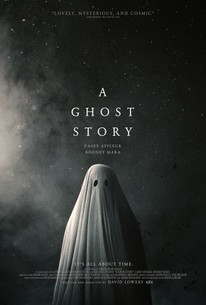 Critics Consensus: A Ghost Story deftly manages its ambitious themes through an inventive, artful, and ultimately poignant exploration of love and loss.

Critics Consensus: A Ghost Story deftly manages its ambitious themes through an inventive, artful, and ultimately poignant exploration of love and loss.

Critic Consensus: A Ghost Story deftly manages its ambitious themes through an inventive, artful, and ultimately poignant exploration of love and loss.

With A GHOST STORY, acclaimed director David Lowery (AIN'T THEM BODIES SAINTS, PETE'S DRAGON) returns with a singular exploration of legacy, loss, and the essential human longing for meaning and connection. Recently deceased, a white-sheeted ghost (Academy Award-winner Casey Affleck) returns to his suburban home to console his bereft wife (Academy Award-nominee Rooney Mara), only to find that in his spectral state he has become unstuck in time, forced to watch passively as the life he knew and the woman he loves slowly slip away. Increasingly unmoored, the ghost embarks on a cosmic journey through memory and history, confronting life's ineffable questions and the enormity of existence. An unforgettable meditation on love and grief, A GHOST STORY emerges ecstatic and surreal - a wholly unique experience that lingers long after the credits roll.

Will Oldham
as Prognosticator

Grover Coulson
as Man In Wheelchair

Kimberly Fiddes
as Making Out

Daniel Escudero
as Making Out

Augustine Frizzell
as Clara's Wife Who Is Writing A Book

Critic Reviews for A Ghost Story

The unconventional narrative structure seems more beguiling the more you think about it - this is a film designed to expand in your memory.

Slow and baffling at times, A Ghost Story follows you, not unlike the undead spirit within its frame.

The film stubbornly refuses to connect with its deeper themes because of a vague, self-consciously arty structure and a pace so deliberate it approaches a stand-still.

This is a film not so much about spooks as about deadly loss and the disorientation it brings.

A meditation on loss but also on legacy - on our enduring need to endure.

We end up with a film that, for all its playfulness, connects plainly with the emotions.

It just aches with loss. There are these edits that allow for the immediate unyielding passage of time, that show the world disappearing in the blink of an eye, that moved me

Moving at the speed of molasses trying to drip UP a wall, the movie clocks in at just over 90 minutes, yet many fidgety viewers will swear it runs at least four hours. Yet for those who can get attuned to its leisurely approach, it's a fascinating watch.

A limp, intellectually lazy, leaden load of grief-posturing... a hollow thing that wears sorrow as a fashion accessory in the hopes that it makes it look mysterious.

What's unique about Affleck's performance is that he gives it almost entirely from beneath a flowing, white sheet. It's method acting at its finest.

This film just struck a weird sensitive strange chord with me.

Audience Reviews for A Ghost Story

Profoundly melancholy and devastatingly sad, A Ghost Story is a beautiful film about memory, loneliness and longing for something you lost forever. Full review on filmotrope. com

Not for everyone, especially those seeking a quick thrill, this rumination on death and the afterlife is laced through and through with poetry and longing, and wonderfully so. Especially entertaining are the remarks about time dilation, how it expands, how it contracts. The actors do well, but essentially only are the messengers of the director's vision on the nature of life. See this when you've got quiet time.

David Lowery is fast becoming a director to keep a close eye on. His Malick-esque Ain't Them Bodies Saints struck a strong indie and meditative vibe before he, somewhat bizarrely, took on Disney's remake of Pete's Dragon and made a huge success out of it. Now, though, Lowery returns to the same tone of Saints by delivering a very unusual and unique take on a ghost story. With a brief synopsis of the plot or by even judging the films poster you'd be forgiven for thinking that this film is possibly a joke or at least one that relies heavily on humour. But it's not and it doesn't. This is a very poker-faced meditation on memories, attachments and loneliness and, for those with an open mind, it works an absolute treat. Plot: A musician (Casey Affleck) and his wife (Rooney Mara) prepare to move from their rural house before the musician is suddenly killed in a car accident. Waking on a mortuary slab in a white sheet, his ghostly spectre returns to his house where he has to witness his wife's grief and come to terms with the fact that he is no longer part of our waking world. Lowery's film is a very simplistic one. He starts slowly and quietly by using minimal dialogue and he adds little to no backstory on his two main characters, refusing to even give them names. Mara and Affleck are merely credited with the initials 'M' and 'C' respectively and it's this sparse approach that lends the film its intrigue. For those expecting or demanding jump scares or shrieking damsels you'd be better served by looking elsewhere. It does have its ghostly apparition but that's as far as it goes in terms of it feeling anything like a horror. This is, in fact, more a rumination on life and the impact (or lack of) that an individual has with their time on this earth. It focuses on grief and the passage of time whereby everything that was once important to a person will inevitably be washed away and, in the grander scheme, their existence ultimately becomes inconsequential. Lowery gives plenty of food for thought here and skilfully achieves the impact of time by employing a languorous pace. The pacing will put many viewers off as there is a certain commitment and patience required when exploring C's torturous purgatory but there's also a genuine intimacy at work. C witnesses his wife's grief while being unable to provide any comfort or solace just as he also witnesses her move on with her life when she eventually brings a date home and then packs up to leave the home that they once shared. It's in these moments that you identify with C's grief and one scene in particular has another ghostly spectre appear at a neighbours window. They both communicate with each other on how they're just "waiting for someone" but can't remember who and it's at this point that you realise the nightmarish isolation that these wandering souls are left with. Their essence and being has essentially been forgotten which resonates strongly with the existential musings from time immemorial. A genuinely heartfelt and thought provoking piece of work. Lowery explores the metaphysical with more than a tinge of despair and deep sadness. For a concept that would normally be laughed out the door, Lowery and his cast deserve the utmost praise for attempting something very different and, better still, managing to pull it off when they could so easily have failed. This film may be slow but it's also rich and hugely rewarding when you allow it to express its elegiac tones. Mark Walker

This movie is simultaneously not for everyone, while also trying to demand everyone's attention. That statement may confuse some people, so please listen closely if you're intrigued, because this review if going to be about me gushing on how incredible this film is. Whole critics seem to general love this film, average moviegoers seem to be pretty divisive on this film in retrospect. Personally, I completely see how many would be bored or turned off by this film, so whether or not you like this film is up to you. Personally, this film opened my mind in ways I wasn't expecting and I found myself in a state of transfixion when the credits began to role. So, this review will definitely lean heavily on a recommendation to everyone, but please be advised that the film itself is absolutely not for everyone. Now that I have that out of the way, let's dive in. As a couple is about to move out of their first house onto bigger and better things, the husband (Casey Affleck) dies in a tragic accident. The film then follows the wife (Rooney Mara) as she copes with her loss. The husband returns in ghost form, walking around the halls of the house, watching her every move, stating that people really do watch over us after they die. This premise is fantastic, but the visuals themselves and the way the movie is constructed is what I feel may turn many people off. Coming off cheap by literally having the husband dressed in a bed sheet, the movie may seem cheesy to some, but that's not the point of it at all. From long takes of people sitting alone in a room to time travel in order to open viewers mind's, this movie takes many risks, but I think they are all genius in their own right if you're in the proper mood when watching this film. Going from many short films, to independent features, to a big blockbuster in last year's Pete's Dragon, director David Lowrey has been all over the business, so it was pretty clear that this was a passion project for him, and that the amount of viewers this film gained didn't matter to him in the slightest. I think this was the best way to make a movie like this, because only the most hardcore film fans will probably discover it, which is where I feel it's best suited anyways. There is so much symbolism about the meaning of life and which aspects of it really matter the most, but I feel as though many viewers won't catch on. Once again, if you're in the right mindset and are open to literally anything, then I believe you'll have the same reaction to this film that I did. Many viewers like being able to relate to a character when they speak to someone and open up about themselves, but this film is very far from anything like that. There are stretches of the film that can last up to 30 minutes without a single word being spoken, leaving it up to your interpretation on how they're feeling or what they're thinking. This is a very lonely-feeling film that you need to be relaxed and open-minded about. In my opinion, when a film can show you a piece of imagery and have you understand what a character is going through, what they're thinking, all while giving you a sincere look at our planet as a whole, when it's accomplishing everything it set out to do, and then some. Simply put, sometimes showing things to an audience is much more powerful than having it explained. In the end, A Ghost Story is strangely enough one of the most powerful experiences you'll be able to see an all of 2017. Now, there isn't much dialogue, so you really have to pay attention and think about every piece of imagery, but if you're willing to do that, then I believe you will have a terrific experience as well. If you're not into this film after the first 10-20 minutes then you're either not in the right mindset or it's just not for you, which I completely understand. Many people will hate this movie, but I believe the message itself is worth waiting for alone. A Ghost Story is easily one of my favourite films of the year and I can't wait to watch it multiple times.