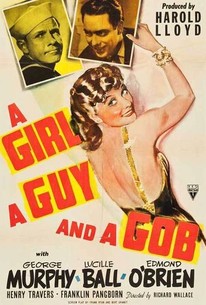 A Girl, a Guy and a Gob Photos

The girl is stenographer Dot Duncan (Lucille Ball); the guy is her boss, stuffy young shipping magnate Stephen Herrick (Edmond O'Brien); and the gob is a brash sailor known as Coffee Cup (George Murphy). Not surprisingly, the plot involves the efforts by the self-effacing Stephen and the self-confident Coffee Cup to woo and win the lovely Dot. And that's about all the "story" there is; the rest of the picture is jam-packed with round-robin comic misunderstandings and wild slapstick setpieces. A Girl, a Guy and a Gob was one of two RKO Radio films produced by silent-screen great Harold Lloyd, who reportedly dropped in on the set from time to time to offer a bit of sage comedy advice (note the "handkerchief" bit utlized by Edmond O'Brien; it had previously done service in Lloyd's own Welcome Danger). Not as big a moneymaker as Harold's starring features of the 1920s, the RKO film nonetheless turned a tidy profit for the studio.

Mary Field
as Woman on Street

Critic Reviews for A Girl, a Guy and a Gob

One of the season's funniest.

It is to be applauded for the fun you have. [Full review in Spanish]

Audience Reviews for A Girl, a Guy and a Gob

With that title you might expect this to be dreadful and while it's no award winner it is a charming little B with three appealing leads.

A Girl, a Guy and a Gob Quotes