A Grandpa for Christmas2007 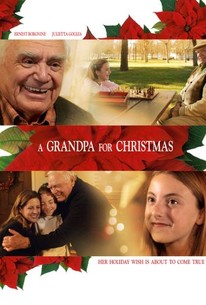 A Grandpa for Christmas Photos

A retired showman and twenty-five year divorcee connects with the granddaughter he never knew in this warmhearted holiday film starring Earnest Borgnine, Katherine Helmond, Tracy Nelson, and Jamie Farr. Ever since his divorce twenty-five years ago, eighty year old bachelor Bert O'Riley (Borgnine) has grown rather accustomed to living by himself. When his estranged daughter Marie (Nelson) is hospitalized following a serious car crash, however, Bert readily agrees to take in her nine year old daughter Becca (Juliette Goglia). Trouble is, Bert's social skills aren't so sharp after living alone for over two decades, and Marie hasn't exactly given Becca the best impression of her estranged grandfather either. At first the air between Bert and his precocious new roommate is downright icy, though things gradually warm to a thaw after Becca announces that she'd like to perform in her school's upcoming Christmas pageant. Later, after recruiting fellow showbiz retirees Roxie (Helmond), Adam (Farr), and Karl (Richard Libertin) to give Becca a few helpful pointers, Bert is called on to take over the show. Perhaps by working together, Bert and Becca can finally bridge the gap that has divided their family for so many years.

Critic Reviews for A Grandpa for Christmas

There are no critic reviews yet for A Grandpa for Christmas. Keep checking Rotten Tomatoes for updates!

Audience Reviews for A Grandpa for Christmas

There are no featured audience reviews yet. Click the link below to see what others say about A Grandpa for Christmas!

A Grandpa for Christmas Quotes