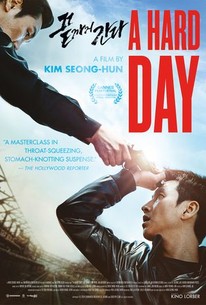 Driving back from his mother's funeral, homicide detective Gun-soo runs over a man in a dark rural street. In a moment of desperation, he dumps the body in a coffin alongside his mother. A few days later, Gun-soo flips through a listing of open cases and finds his accident victim. His colleague is on the accident case and is slowly making progress. Making matters worse, a witness steps forward, a detective named Park. For a reason unclear to Gun-soo, Park wants the body. Without another choice to depend on, Gun-soo digs his mother's grave and retrieves the body, only to find gunshot wounds on it. As Park's threats become more vicious and hits closer to home, Gun-soo decides to face Park head-on once and for all. (C) Kino

News & Interviews for A Hard Day

View All A Hard Day News

Critic Reviews for A Hard Day

Kim Seong-hun's unique humor is usually droll and deadpan. He doesn't overemphasize objects like a remote-controlled soldier or other marks of inventiveness better unspoiled.

It's hard to feel sympathy for such a miserable miscreant. Impossible, in fact.

You'll be glad that "A Hard Day" isn't happening to you, but you won't regret observing it all from a safe distance.

When was the last time you saw a modern thriller with so much narrative and visual wit that you were simultaneously laughing and crying out in fear - the kind the Coen brothers often make and Spielberg when he's in a Hitchcockian mood?

At its best, "A Hard Day" has a breakneck pace that allows one to easily dismiss the more ridiculous, downright nonsensical aspects of its plot. Only occasionally will the eyes roll. For the most part, it works.

A spectacular action thriller that pays no respect to the viewer's cardiac capabilities. [Full review in Spanish].

This is a slick, neo-noirish tale that pits one man against Murphy's Law - anything that could potentially go wrong does, and in the worst way possible.

There's a constant feeling of "this plan really shouldn't work" that's reenforced by the sheer number of times someone almost stumbles onto Geon-soo's ridiculous plot.

It has flashes of black humor that make the prolonged extreme violence, Ko's total lack of remorse and the film's deep cynicism about Korean police corruption seem like a lot of fun.

Kim Seong-hun directs a film that constantly lingers between dark comedy and thriller, succeeding in the portrayal of both, creating a highly entertaining picture, where the spectator laughs while having a constant sense of agony for the protagonist

When the film works, it's great; when it doesn't work, it's a bit corny.

Audience Reviews for A Hard Day

This is one of the best South Korean thrillers I've seen in a long ass time and, really, one of the better South Korean films I've seen since Pieta. That may not say a lot about South Korean cinema, lately at least, but I think it's mostly the fact that a lot of the really great movies don't find their way here. Either that or they're going through a slump. Regardless, with that out of the way, I really enjoyed this film quite bit. There's just something very skillful about the way it handles some fairly high-tension moments whilst also providing you with a good amount of comedic elements in there. Not like the comedic elements there make this the best comedy of 2015, but there's enough of it that helps liven things up from what is a very taut and well-executed suspense/thriller. I think it benefits from a really strong cast. The lead character, Detective Go is fairly ineffectual and he's always two steps behind the villain of the film. He's always working against the clock and he can't really hold his own in a fight if he's overpowered, which does happen in this movie. It works because it's actually believable in that Go simply wouldn't be working at peak capacity when he has to worry about another cop trying to blackmail him with revealing what he did to the world. It's an interesting direction to take your lead character, but I think the scripting and Lee Sun-kyun, who plays the detective, definitely make this approach work. It also helps when you're put against such an effectively dastardly villain as you have in this movie. Perhaps it's not even the scripting of the villain, I think it's Jo Jin-woong's performance that really takes the film to the next level. It's clear that he had a certain commitment to this role and that he was gonna give the absolute best of him to make the role memorable. According to his Wikipedia page, I've seen him in some movies, but this might be, from what I've seen, his most high-profile role to date and he is pretty damn excellent. There's just something detestable about him and I think Jo plays perfectly into that and it makes watching him really entertaining. The film moves at a real fast pace, it's not that there's a lot of information that the movie needs to get out, but there's still a lot of stuff going on at all times. The movie does not take a break before moving on to the next scene that'll move the story forward. There's a manic energy about it and that's part of the reason why the film feels like it's over quicker. I don't think the film is as twisty as a lot of these films tend to be and, you know what, it's to the film's benefit. A lot of these films have these really stupid twists that make no sense in the context of its own story and I'm glad to see a film not give in to that. That's about it really, I really liked this movie. It's a really consistent film. It's really good from beginning to end. It has a really strong cast, characterization and simple, but effective, storytelling. This is an easy recommendation.