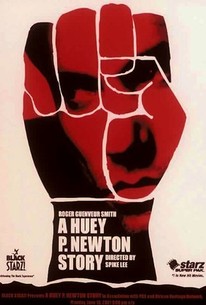 BLACK STARZ!, a Starz Encore channel will premiere this spring an original production, A Huey P. Newton Story (AHPNS), in association with PBS and African Heritage Network. Spike Lee directed the film and stage actor, Roger Guenveur Smith created, wrote and stars in the film which was adapted from his Obie (R) Award winning off-Broadway solo performance. Steven Adams, Bob L. Johnson and Marc Henry Johnson of Luna Ray Films, LLC are producers.A Huey P. Newton Story is a virtuosic and intimate portrait of Huey P. Newton, the late co-founder of the Black Panther Party for Self Defense. Spike Lee employs his signature mixture of film and archival footages in color and black & white to capture Newton's "inner mind" and point of view as Guenveur Smith performs before a live audience.A Huey P. Newton Story is scheduled to have its world premiere on BLACK STARZ! June 18, 2001 at 9:00pm e/p. -- © 2001 Luna Rays Films, LLC

Huey P. Newton
as Self

Orson Welles
as Self

Jim Brown
as Self

Fred Williamson
as Self

Richard Pryor
as Self

Angela Davis
as Self

Martin Luther King Jr.
as Self

Malcom X
as Self

Miles Davis
as Self

Kathleen Cleaver
as Self

Marlon Brando
as Self
View All

The production doesn't resolve the paradoxes in Newton's life, but it does give viewers some idea of what it might have been like to be inside his head.

By bringing Newton alive, Smith opens the door for further exploration of this colorful, insightful figure.

The anger and frustration toward racial injustice that fuels Newton's tears and tirades are framed beautifully by director Lee.

While undeniably compelling to watch, this slant tends to underline the negative aspects of Newton's legacy at the expense of his achievements.

The film represents a new triumph for Lee, one that comes closer to Do the Right Thing than nearly anything else in his career.

The film is one long monologue of Huey's inner mind , culminating in a riveting shadow boxing dance by Smith, who then sits down for the final end.

Roger Guenveur Smith taps in deep as Huey Newton, blazing through this mesmerizing performance piece based on the still-controversial life of one of the founders of the Black Panther Party.

A memorable depiction of a man every bit as tricky and complex as the movement he co-founded.

Those who haven't seen this, should definitely watch it.