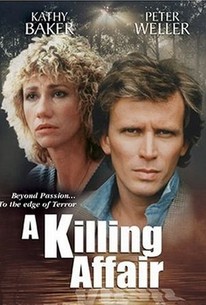 When reviled labor boss Pink Gresham (Bill Smitrovich) is found murdered, his wife Maggie (Kathy Baker) is visited by Baston Morris (Peter Weller). Morris claims to have killed Pink before leaving his lifeless corpse symbolically in an outhouse. Instead of leaving, Morris moves in on the backwoods widow, and the two begin a psychological game of nerves. As in the works of William Faulkner and Tennessee Williams, both Maggie and Morris are plagued by their past experiences and hold closely guarded personal secrets. This is David Saperstein's directorial debut.

Critic Reviews for A Killing Affair

There are no critic reviews yet for A Killing Affair. Keep checking Rotten Tomatoes for updates!

Audience Reviews for A Killing Affair

This is an unheard of movie by many. Don't let that scare you as it turns into one hell of a movie that?s for sure. Setting is West Virginia, back in the forties. A Boss who is running around on his wife turns up murdered, beaten with an ax on his own property, A stranger shows up at the door of the surviving wife, so starts our Drama / Mystery. Definite worth 4 stars.