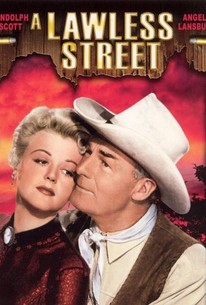 Up until its surisingly mundane finale, A Lawless Street is one of the best of the Randolph Scott westerns of the 1950s. Scott plays famed marshal Calem Ware, whose strenous activities on behalf of law and order have exacted a toll on his personal life. Keeping the peace in the town of Medicine Bend, Ware hopes to someday be reconciled with his ex-wife Tally Dickinson (Angela Lansbury), now a touring musical comedy star. Just as Tally arrives in Medicine Bend, Ware is forced to deal with big-time criminals Thorne (Warner Anderson) and Clark (John Emery), not to mention their hired gun Baskam (Michael Pate). Will he do his duty and rid the town of his outlaw element, or will he hang up his guns as Tally wants him to? One of the highlights of A Lawless Street is a lively saloon-hall number performed by Angela Lansbury, who is quite a dish in her revealing stage wardrobe.

Critic Reviews for A Lawless Street

Randolph Scott was born to play this kind of cowboy role.

Audience Reviews for A Lawless Street

There are no featured audience reviews yet. Click the link below to see what others say about A Lawless Street!