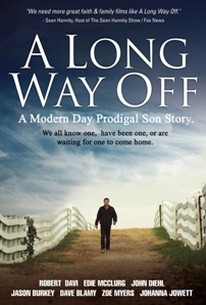 A Long Way Off Photos

In this modern day retelling of the timeless Prodigal Son Parable, young Jacob is tired of living on the family farm, submitting to the rules of his Father, Mr. Abraham. One day he demands an early inheritance from his father, who shocks his young son by agreeing to give it to him-contingent on first sitting through a 6-hour intensive flurry of life trainers in the area of Health, Wealth and Wisdom including real life experts in their fields, featuring world famous pollster Scott Rasmussen, Talk Show host Sean Hannity and Psychologist Dr. Bev Smallwood who warns Jacob not to flash his cash since that could attract the 'wrong kind of woman.' Jacob perks up at that thought and heads to the city to prove that his modern ways are better than his dad's tradition ways. For a while he does well-surprisingly well taking huge business risks, and still making money even after his extremely flamboyant lifestyle that attracts the wrong women including seductive Laura, whose rich boyfriend Frank is often dangerously nearby. Jacob got the it all: money, ladies, prestige-but then-he loses it all and just when he things he's hit bottom the bottom drops some more-until he is eating out of dumpsters and eventually ends up in a literal pig pen. Coming to his senses he heads home, determined to work in an entry level position for his dad, who surprises him once again by running to him-but is it to kiss him or kill him?

Critic Reviews for A Long Way Off

Audience Reviews for A Long Way Off

There are no featured audience reviews yet. Click the link below to see what others say about A Long Way Off!

A Long Way Off Quotes