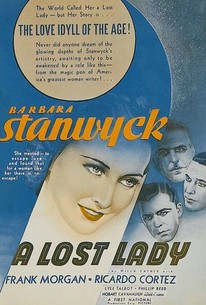 This is the second movie version of Willa Cather's Pulitzer Prize winning novel that tells the story of a bride-to-be whose fiance is near-fatally injured by the jealous husband of a woman he had an affair with. The poor young woman is so upset by the situation that she swears she will never love another and takes off to live in an isolated mountain retreat. There she feels terribly sorry for herself. One day she is moping along a rough trail, falls and hurts herself. Fortunately, she is rescued by an elderly lawyer who helps her heal both physically and psychologically. The grateful girl ends up marrying him. Unfortunately she meets a handsome young man with whom she falls passionately, but chastely in love. Now she regrets marrying the old attorney. She decides to tell the lawyer her true feelings. When she is finished he promptly keels over with a heart attack. It might be noted that after Cather saw this film, she forbade the further sale of her works to Hollywood.

John Hale
as (uncredited)
View All

Critic Reviews for A Lost Lady

It seems a pity to waste a fine actor like Frank Morgan on such a picture. But feeling the way I do about Miss Stanwyck, it didn't seem below her talents.

There are no featured reviews for A Lost Lady at this time.