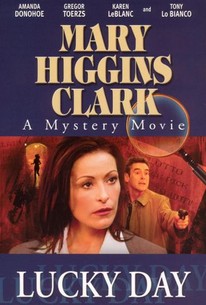 Another of the PAX network's adaptations of the suspense novels of Mary Higgins Clark, the Toronto-filmed Lucky Day stars Amanda Donohoe as Nora Barkin, an aspiring actress who supports herself by working for a courier service. No sooner has Nora's friend and coworker Bill Reagan (Gino Marrocco) jubilantly announced that he possesses a lottery ticket worth 13 million dollars than Bill is killed by an unknown assailant. Though discouraged from doing so by investigating detective Marinello (Tony Lo Bianco), Nora insists upon trying to solve Bill's murder herself -- and in the process she follows a trail of evidence leading to her own husband Jack (Gregor Torzs). Mary Higgins Clark's Lucky Day was originally telecast on April 27, 2002.

Guylaine St-Onge
as Sandra
View All

There are no critic reviews yet for Mary Higgins Clark's 'Lucky Day'. Keep checking Rotten Tomatoes for updates!

Must be a made-for-TV movie. A happy-go-lucky guy is murdered for his winning lottery ticket. Nora is a friend, and is trying to figure out why he disappeared, enlisting the help of a sympathetic co[/