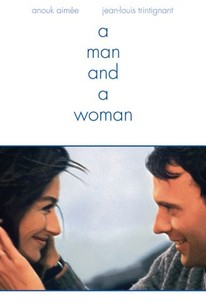 A Man and a Woman Photos

The ultimate "date" movie of the mid-1960s, director Claude Lelouch's A Man and a Woman (Un Homme et Une Femme) stars Jean-Louis Trintignant and Anouk Aimee in the title roles. The twosome meet at the boarding school where their children are enrolled. Aimee, an actress, misses her train home, and Trintignant, a professional race car driver, offers her a ride. It is the first of several friendly encounters which eventually blossom into love. Both want to commit to each other, but neither can shake the Past. The now-famous climactic scene in a train station was not scripted at the time of shooting, thus Aimee was unaware that director Lelouch had decided upon a tearful reunion between her and Trintignant. This explains the look of utter surprise on the actress' face. Much has been written about the possible motivation behind Lelouch's decision to film some scenes in color, others in black-and-white. None of the more ardent auterists truly want to hear the director's explanation: he'd run short of money halfway through production, and black-and-white film stock was infinitely cheaper. The winner of two Oscars (one for Best Foreign Film), A Man and A Woman also scored on the "top ten" with its memorable theme music by Francis Lai. A sequel, A Man and a Woman: 20 Years Later appeared....twenty years later. ~ Hal Erickson, Rovi

Yane Barry
as Mistress of Jean-Louis

Gerard Sire
as Announcer
View All

Critic Reviews for A Man and a Woman

Advertising, if not cinema, colonised these images long ago. Yet how to resist a pairing as photogenic as Anouk Aimee and Jean-Louis Trintignant?

It's full of misty romps in the meadows, rain-soaked windshields, assorted puppies and lambs, and a 'bittersweet' theme song that drones incessantly on the sound track.

Anouk Aimee has a mature beauty and an ability to project an inner quality that helps stave off the obvious banality of her character, and this goes too for the perceptive Jean-Louis Trintignant as the man.

They seem two dimly sentient beings moved by memories of conventional affections and the compulsions of ordinary love.

Failing to find the words to resolve this situation, Lelouch leaves the rest of his story to his songwriters, and, predictably, the picture sinks into the sticky swamp of adolescent lovisms.

This rightfully holds a special place in the hearts of filmgoers everywhere.

Enjoyable slick soap opera romance that did a big box office despite its superficial strains.

Style is everything in Lelouch's romantic melodrama, one of the 1960s most popular international hits, due to the music and chemistry between the glamorous Anouk Aimee and the sexy Trintignant, both at their peak

Although bits of it will look hackneyed to current viewers, at the time it was sensationally sexy (and was a global smash hit) and it has retained an enjoyable sensuality and charm.

Audience Reviews for A Man and a Woman

Apparently this was the date movie back in the sixties. What it gives to me is another extraordinary triumph of the French cinema at the time.The characters are well defined and the viewer gets a true emotional attachment.

"un homme et une femme"(a man and a woman) is one of the popular french new wave movies which had swept over america with its monpoly on the market of foreign cinema then in 1966. the intertextuality of the synchronized events in various field is my usual thinking mode, the approach new wave applies on non-linear story-telling is highly influenced by the rising popularity of french new-novel like margret duras. the theory is to dissect the fragments of living events then sew them up together spontaneously as the protagonist's freewheeling minds lead. so you witness one segment of past or the envisage of future jumps to the present as our mind usually reels randomly into various visceral images at one moment. you could deem it as the deficiency of attention focus or lack of concentration, but the course of sentimentaity and human emotions are inclined to occur more often in this way since distractions've become more of common symptom due to the contagion of media. the most frequent set in "un homme et une femme" is within the car when the leads are chattering about each other, but you cannot really grasp too much within the conversations but the rampant images conjured up by the leads as they utter their tales of life. rather than dialogue-driven, it's prompted mainly by visionary scenes, intermittent narrations there from the man to speak of his mind and his motivations and hesitations on certain actions of his, but never the woman's? woman here stays as the enigmatic muse for the man to covet just like the conventional state of genders. (so it cannot be a sentimental chic flick but a romantic male-centered movie about a man's infatuation over a woman,) for audience like me who watches too many american or anglophilic films may find it a slackening dozer but still somehow refreshed by such novelty of story-telling, at least it is faithful to its simplicity without over-flaunting the new-wave expertises to over-complicate the matters. the soundtrack is dreamily metropolitan and the views of those locations seem to be idyllic to demonstrate those ordinary but lovely sceneries in france like mobile postcards. boredom may strike you during watching it, but it gives you a hearty smile at the final 15 mins with a reasonable twist like the miracle most people in love would pray for. the notably creative scene would probably be two leads making love when the woman thinks of the memories of intimacy with her demised husband that leaves the man cold as his partner's mind drifts over somewhere else, and the lady's comment is simply "i never lie to you that he's dead but he still lives in my heart"..such frastrating honesty. there's no melodrama but brief moments of life's absurdity in a realistic way. also there's nothing too intense or provocatively passionate about "un homme et une femme" but those possible scenarios which might happen to some of us who have the bless to fall in love. (ps) my best advice would be listening to the soundtrack, as the director claims that he chose the music for the story he wrote first then everything else was built along the moods of melodies. indeed the soundtrack of "un homme et une femme" is probably one of the best in cinematic history, without it the movie could be a complete bore.

I wasn't very interested in the characters. The story was slow and the version I saw on video had really bad voices dubbing the English. You could especially tell that the voices of the kids of the man and woman were being dubbed by adults talking in a higher pitched voice to try to sound like children.

Classy, touching and beautiful mosaic about the prelude and aftermath of love. great photography and score.

A Man and a Woman Quotes