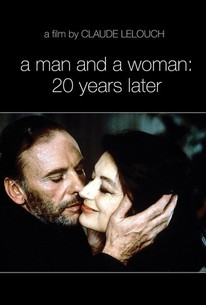 A Man And A Woman, 20 Years Later Photos

It is possible to enjoy Claude Lelouch's Man and a Woman: 20 Years Later on its own merits, though we advise that to fully appreciate the film, it's best to catch Lelouch's 1966 blockbuster A Man and a Woman first. True to its word, the 1986 film brings us up to date with the protagonists of the earlier picture. One-time movie script girl Anouk Aimee is now a producer, suffering a slump due to a string of box-office bombs. Former race car driver Jean-Louis Trintigant now books races for younger drivers. His love affair with Aimee long in the past, Tritignant is startled to receive an out-of-the-blue phone call from his former amour. She wants his permission to film a musical version of their romance, but with more "suitable" younger leads. Alas, Aimee has been part of the Studio System too long, and can't help but include a pointless subplot involving an escaped lunatic. Aimee must give up her show-biz excesses, and Tritignant must forsake his much-younger mistress Marie-Sophie Pochat, in order to clear the decks for a happy ending. ~ Hal Erickson, Rovi

Patrick Poivre d'Arvor
as Himself

Thierry Sabine
as Himself

Robert Hossein
as Himself

Nicole Garcia
as Herself

Jacques Weber
as Himself

Critic Reviews for A Man And A Woman, 20 Years Later

Twenty years later and none the wiser for it.

At several points, Mr. Lelouch inserts clips of the young couple from A Man and a Woman. Those moments glow and remind us of what is missing this time round.

At his worst, Lelouch is extraordinarily awkward, shooting off in 12 different directions.

Did you ever consider trying to revive that rhapsodic but short-lived affair that took place twenty years ago, and then think better of it? Well, Claude Lelouch didn't think better of it, and the result is A Man And A Woman, 20 Years Later.

An enjoyable, often funny effort, though those who've seen and liked the original are bound to appreciate this more than other viewers.

Undeniably visula with a suitably sweeping score. Cynics should stay well away and let the rest of us enjoy it.

The story falls flat since not enough loving care has been given to the screenplay.

There are no featured reviews for A Man And A Woman, 20 Years Later at this time.

A Man And A Woman, 20 Years Later Quotes