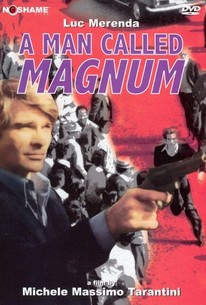 This late-period entry into the cycle of Italian crime films is a prototypical example of the form. Italian action star Luc Merenda stars as Dario Mauri, a Milanese cop who is transferred to Naples. He immediately sets his sights on bringing down crime boss Laurenzi (Claudio Gora), with begrudging assistance from his wisecracking new partner, Capece (Enzo Cannavale). Laurenzi also has other problems to deal with: one of his drug shipments has been stolen and attempts to get it back reveal traitors in his midst. A Man Called Magnum is unique in the Italian crime subgenre for two reasons. The first is that it was directed by Michele Massimo Tarantini, who dabbled in action but was better known for directing sex comedies. The other reason is that mixes in a surprising amount of comedy, usually involving the character of Capece, for this usually grim subgenre. This unusual blend of action and humor was given a domestic release on DVD by NoShame Films in 2005.

There are no critic reviews yet for A Man Called Magnum (Napoli si ribella). Keep checking Rotten Tomatoes for updates!

There are no featured audience reviews yet. Click the link below to see what others say about A Man Called Magnum (Napoli si ribella)!