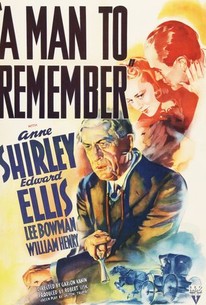 A Man to Remember Photos

A remake of 1933's One Man's Journey, A Man to Remember was the auspicious film directorial debut of Garson Kanin. Told in flashback from the vantage point of a funeral, the film details the life of small-town general practioner Doctor Abbott (Edward Ellis). Arriving in the town of Westport during WW1, Abbott continues to practice without fanfare--and with precious little appreciation from his patients--for the next two decades. Working behind the scenes, Abbott endeavors to prevent a budget-cutting move fomented by crooked politicians; and during a deadly polio epidemic, the ever-selfless Abbott performs far above and beyond the call of duty. At last recognized for the true humanitarian that he is, the doctor has little time to bask in this latter-day glory: shortly after the polio crisis, he dies of a sudden heart attack. Written by Dalton Trumbo, A Man to Remember was lensed in 15 days for a budget of less than $120,000. No matter: despite its humble "B" origins, the film was lauded by critics and moviegoers alike as one of RKO Radio's best 1938 efforts.

Dick Jones
as Dick as a Child

Carole Leete
as Jean as a Child

Critic Reviews for A Man to Remember

The picture falls below the heights but it is within hailing distance because its hero is truly a man worth remembering.

Its simplicity, truthfulness, and down to earth drama is more sharply etched because to the numerous scenes of biting satire.

An unassuming and beautifully rounded out story of a small town doctor's career.

There are no featured reviews for A Man to Remember at this time.

A Man to Remember Quotes