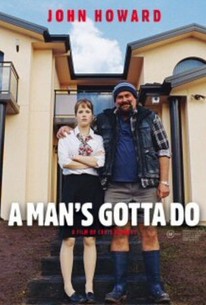 A Man's Gotta Do Photos

A family man and working stiff has a lucrative but illegal sideline in this comedy from Australia. Eddy (John Howard) makes his living as a fisherman in a small coastal town in New South Wales called Shellharbour -- or at least that's what his wife, Yvonne (Rebecca Frith), and his twentysomething daughter, Chantelle (Alyssa McClelland), think. Actually, Eddy and his partner, Dominic (Gyton Grantley), commit murders for hire when they aren't busy on the ocean. Eddy already has a slightly bumpy relationship with both Yvonne and Chantelle, but things become more complicated when Chantelle is given her walking papers by her Russian fiancé, and her new boyfriend turns out to be a ne'er-do-well who might be one of Eddy's upcoming targets. A Man's Gotta Do was written and directed by Chris Kennedy, who worked as a dentist before he found success as a filmmaker.

Vasa Gavrilovska
as Svetlana
View All

Critic Reviews for A Man's Gotta Do

Chris Kennedy's film isn't nearly as much fun as it seems to think it is.

In this seasick, heartsick romp, a suburban Australian family struggles with love, loyalty and a fear that the patriarch is making his mortal enemies disappear.

The TV-sitcom script does them in.

The only thing more inexplicable than the loathsome score is the story's determination to impregnate all its major female characters.

Lacks a coherent message, let alone anything very funny at which to laugh.

Chris Kennedy's amusing comedy feels more like a 90-minute pilot for a TV series than a feature film.

McClelland is a joy to watch, even when the story strains too hard for lovable whimsy, which happens much too often.

There are no featured reviews for A Man's Gotta Do at this time.

A Man's Gotta Do Quotes