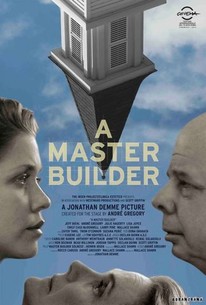 The artistic triumvirate of Jonathan Demme, André Gregory, and Wallace Shawn update Henrik Ibsen's The Master Builder, a modern classic about a successful, egomaniacal architect who has spent a lifetime bullying his wife, employees and mistresses - who nonetheless wants to make peace with himself as his life approaches its final act. Working from his own translation of the Norwegian text, Wallace Shawn gives a tour-de-force performance as the cruel, yet guilt-ridden architect. Jonathan Demme's direction is based on the near-legendary production created for the stage by André Gregory, developed over a 14-year period. Lisa Joyce plays a sensual, mysterious young visitor who turns the household upside down, much to the consternation of Julie Hagerty, perfectly cast as Shawn's neurasthenic, long-suffering wife. Scandinavian angst -- reinterpreted by New York's finest. (C) Abramorama

Sheilach Weymouth
as Nurse
View All

News & Interviews for A Master Builder

View All A Master Builder News

Critic Reviews for A Master Builder

There is muscle and volume in the performances; but had Demme hung back, and kept things cooler and quieter, the mastery of what Ibsen built, and the agon of his extraordinary hero, would have cast a more looming shadow.

For a movie that lasts longer than two hours and is made up solely of talking, it's impressive that the story never seems to drag.

Filmed theater? Absolutely, but also, to my complete surprise, something else again.

Though the film makes little effort to open up the play, letting it all unfold, as in the original, within Solness's house - if not his mind - Demme's version intensifies the drama into something oneiric.

A film that plays not as a theatrical antique, but as a crackling, profound entry in The Twilight Zone.

Though not as celebrated as the previous efforts of Shawn and Gregory, it's a notable title, at last made worthy of reconsideration following its paltry release.

The film's themes of guilt shine through, but the flawed final product makes A Master Builder frustrating to watch.

Hagerty and Joyce are revelations; the beating hearts of the film.

[Jonathan] Demme sadly recognizes that the creative urge can't be extricated from sexual urges. Yet in the end, the performances are stronger than the film that contains them, as if art cannot come to grips with this conundrum.

If A Master Builder marks the weakest of the three Shawn-Gregory cinematic collaborations, the elegiac tone makes it a fitting conclusion.

even if it doesn't always work perfectly, it is never anything less than engrossing and perplexing, usually in equal measure

Audience Reviews for A Master Builder

There are no featured audience reviews yet. Click the link below to see what others say about A Master Builder!