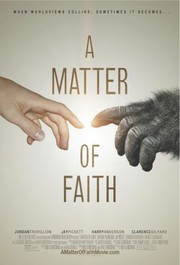 A Matter of Faith

A Matter of Faith Reviews

Jacob P
October 8, 2018
The movie was a fun watch if you are a Christian. However, the message of God throughout the film is very forced. The force-feeding of the film's message ultimately will put off any viewer that doesn't already have the point of view presented in the movie. Other complaints are that the video is very white, with little to no diversity presented. Also, the dialog and acting are? not the greatest.

Giulia M
½ January 31, 2018
As a biologist, I watched this movie thinking it would be an insteresting debate between science and religion (I honestly don't know why I was expecting it to be like Angels & Demons, but nevermind...), but it was just pure crap.
I was honestly wanting to rip my eyeballs out, because it was just horrible to watch.
The acting is horrible, the plot makes no sense at all and there's no character to inspire or that you can rely on. They all suck.
The worst part of the movie is when one of the characters (I think his name is Jason) - that is a fanatic Christian - asks if Tyler's parents are monkeys. Or if their grandparents are monkeys. Or if anyone in his family is a monkey. His response, obviously, is no. Then Jason says there's no reason to believe in evolution, because we don't know anyone who used to be a monkey.
Yeah. Sure. 'Cause that's what evolution is all about. One day you're a monkey and on the next you're human. Jesus...
I think I lost a few IQ points while watching it. The whole story made shallow stupid arguments sound like they make all the sense in the world... but they don't. They're just stupid.
This movie could be way better if everything was structured better; if there was an actual debate between science and religion, and not stupid arguments to see who's more idiot and that religion wins just because.
I do not recomend it at all. It just sucks.

Jerry T
April 22, 2017
Most of the ratings sadly prove the book of Revelation.

Matthew F
½ January 5, 2017
Embarrassing. I am truly embarrassed for everybody who was involved in this movie.

Brandon J
½ August 12, 2016
Even if I was Catholic Again, this movie would seem like pure crap. Not even an ounce of intelligence, this movie would make me want to go Atheist, even though I am now. Highly contradicting. And find better actors, oh yeah the music, Jesus Tap Dancing Christ.

Buddy D
½ August 3, 2016
WARNING: If you are allergic to
Bad acting
Shallow characters
Straw man
Cringy Christians
And/or Bigotry
Then do not watch this movie

I'm an atheist. Just thought I'd make that clear. I have absolutely no problem with religion, however, I just choose not to follow any. In fact, one of my Christian friends absolutely DESPISED this movie for all the reasons I gave. Really the only time religious people get on my nerves is when they're bigoted assholes that try to convert you, like every person that worked on this movie.

And I'd also like to note: I'm not even going to TRY to remember names. I was only half paying attention through the entirety of this movie anyway.

First off, let me summarize this atrocious attempt at a film:

Starts with an unimportant flashback.

Some girl I don't give two shits about (I'm assuming the one from the flashback) is going to college.

But on her way out she forgets to grab her bible, to her family's dismay. They seem to be very controlling, something that I don't think was intended. Like, she doesn't even have free will, and her views and opinions in life have to conform to their standards. It makes me feel uncomfortable...

Whilst on the subject of family, let's talk about her dad.

To put it simply, he's a controlling, religiously intolerant prick.

His daughter starts learning about evolution in her science class. How does he react? He flips his shit.

I think we're supposed to sympathize with him...but I definitely don't.
He doesn't give his own daughter free range to expand her mind. She's her OWN PERSON. Let her believe in what she fucking wants to.

He talks to the science teacher (who was shown to be nice to his students), and guess what!? He's an asshole!

Seriously, literally every atheist in this movie is a manipulative asshole. I'm not gonna talk about the other unimportant attributes of this movie (like the atheist kid), but trust me, even the characters we're supposed to LIKE are loathsome (or maybe just idiots).

Using straw man doesn't strengthen your argument. It makes you look lazy. Your inherent inability to portray ANY atheists as at least somewhat decent people is insulting, and it DEFINITELY doesn't make me root for the "good guys".

Mr. Dad goes and talks to the old science teacher, who was fired for teaching his students about God in science class (jeez, no wonder he was fired. He's a terrible fucking science teacher!) I don't know if the writers are aware of this, but SCIENCE and RELIGIOUS STUDIES are different fucking subjects!

Also, the movie has a rather fatuous claim. "Schools are teaching evolution as the origin of life". No. No they fucking aren't. Like I said, science and religious studies are different subjects. Religion is completely subjective, and your kid's science teacher isn't trying to convert them (the one in the movie is, but he's a bad example since he was written by Christians). And if you can't even handle your kid learning about evolution, just send them to a fucking private school. IT'S NOT THAT HARD!

I almost forgot the most important part!

The great debate! CREATIONISM versus EVOLUTION

Creationism wins....h-HOW!? Because reasons, that's why.

The OLD science teacher comes back and says some random bullshit that is supposed to sound inspiring, but it pretty much falls flat on its face. He literally goes up to the podium and tells the audience, "YOU JUST GOTTA BELIEVE!" I'm no debate expert, but I'm pretty sure you need FACTUAL DATA TO BACK YOURSELF UP. Or at least some sort of proof. Why do I even bother saying this, it's all in the name of the fucking movie. "A Matter of Faith". No, I won't have faith just because you told me to. Fuck this movie and its bigotry.

I know that everyone hates this movie, and I'm just beating a dead horse.
However, since this specific horse caused me so much turmoil, I'll beat it all I damn well please.

Marla H
June 27, 2016
Even though this movie fails to give more information and depth in examining Creationism and Evolution it does bring up the issue of the content schools are teaching students in regards to creation. Schools are run by textbooks and the mention of God or and spiritual belief is completely banned from public schools. Good movie, I'd recommend to watch and you make your own decision.

Cassie S
½ June 10, 2016
I decided to watch this with a 101° fever, since low-rated movies seem to be more enjoyable when I've lost a majority of my cognitive reasoning skills. Unfortunately, my brain would have had to be physically boiling to find this movie appealing. Aside from the fact that I'm fairly certain they stole the background music from various teen drama shows from the 1990s, it is exactly what one would expect from a movie trying to debate creation vs. evolution from a director who obviously never took a biology class. Let me put the ridiculous premise of this movie into perspective: my freshman year of undergrad I went to a super right-winged conservative Christian university, and even they taught evolution as fact. Yet in this movie, the writers were so anti-science that not only is evolution presented as completely and entirely erroneous, but the protagonist is also shown to stop going to church and lose her faith completely after taking only a few weeks' worth of an introductory level freshman year biology course.

And, yet again, the antagonist in a bromidic Christian film is seen as an angry bitter atheist who only doubted God's existence so he didn't have to abide by rules (surprise! No one saw that coming!). The atheist college students are seen as evil womanizers. The debate at the end mainly just covered abiogenesis, which isn't even a part of the theory of evolution, and regardless of them correctly stating via textbook excerpt that we share a common ancestor with apes instead of evolved from apes (as many incorrectly assume), one of their biggest "gotcha" moments was, "Does your mom look like an ape? Does your grandma look like an ape?" Much to the demise of a speechless atheist who apparently had no way of contradicting that question worthy of a Pulitzer Prize. I'm not kidding, this is how awful it was. The borderline satirical nature of this Christian movie almost had me convert to satanism and become part of the anti-vaxxer movement rather than go back to church.

Nguyen L
May 23, 2016
Now streaming on Netflix, you can watch it if you want to tortured your brain for an hour and a half. You can skip to the part that actually tolerable which is the credits.

JOoze V
½ April 13, 2016
Just plainly and simply bad! The story line follows the path of every other christian movie with a debate in it. The arguments presented in the debate are all fallacies (from both parties). The writers have no clue of what evolution even is and therefor the debate is meaningless since every argument presented by the christian party is in response to a moronic representation of evolution that is not even close to being right.

Dustin N
April 1, 2016
We are promised a debate on evolution, then people just walk around talking about the debate the rest of the movie. In the last 5 minutes, we get a debate on abiogenesis.

Kjerstan M
March 21, 2016
Lackluster-
This is a completely bigoted film filled to the brim with inaccurate information. We teach evolution in schools because evolution actually happened. This film is enraging and not worth your time.