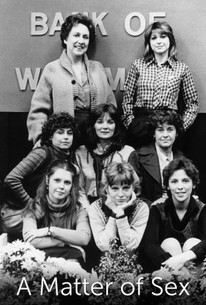 A Matter of Sex Photos

A Matter of Sex is the calculatedly misleading title of a based-on-fact TV movie, which originally bore the more suitable title Women of Willmar. In 1976, the women working in a bank in Willmar, Minnesota become incensed because less-qualified men are being promoted over them. Head teller Jean Stapleton, with the help of attorney Peter Dvorsky and the Equal Employment Opportunity Commission, organizes an employee's union. When the chauvinistic bank officers cause negotiations to break down, Stapleton and seven other female employees go on strike--a job action which lasts for two years, despite political and social pressure from the community. Director Lee Grant, whose daughter Dinah Manoff is cast as one of the strikers, had previously helmed a documentary based on the same incident, The Willmar Eight--which was telecast on PBS the night before the January 1984 network premiere of A Matter of Sex.

Critic Reviews for A Matter of Sex

There are no critic reviews yet for A Matter of Sex. Keep checking Rotten Tomatoes for updates!

Audience Reviews for A Matter of Sex

There are no featured audience reviews yet. Click the link below to see what others say about A Matter of Sex!

A Matter of Sex Quotes