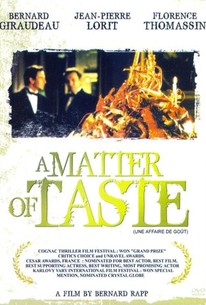 A waiter discovers that good taste can be dangerous in this offbeat psychological drama from France. Nicolas (Jean-Pierre Lorit) is a young man living in bohemian poverty in Lyon, sharing a flat with his girlfriend Beatrice (Florence Thomassin) and three of their friends. Nicolas works part-time as a server, and one night a customer asks him to taste his hors d'oeuvres and see if he can identity the ingredients. Nicolas' palate meets the challenge, and the customer introduces himself as Frederic Delamont (Bernard Giraudeau), a wealthy business tycoon. Frederic hires Nicolas as his official food taster at a handsome salary. Frederic also discovers that Nicolas wears the same size shoes and suits, and he begins costuming Nicolas in his cast-offs. While Beatrice isn't comfortable with their newly luxurious lifestyle, Nicolas takes to it readily, until he becomes seriously ill after eating chemically-tainted seafood. It seems that Frederic loathes seafood, and wanted to condition Nicolas to hate it too -- this was to be the first step toward turning Nicolas into someone who could duplicate Frederic's likes and dislikes on all levels. Une Affaire De Gout was based on a novel by Philippe Balland.

Critic Reviews for A Matter of Taste

There are no critic reviews yet for A Matter of Taste. Keep checking Rotten Tomatoes for updates!

Audience Reviews for A Matter of Taste

There are no featured audience reviews yet. Click the link below to see what others say about A Matter of Taste!

A Matter of Taste Quotes