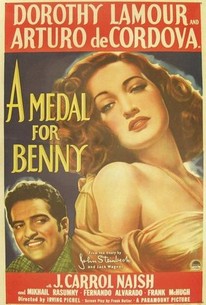 A Medal for Benny Photos

John Steinbeck cowrote this sometimes hilarious, sometimes heart-wrenching study of small-town hypocrisy. Shiftless Benny (who is never seen) has been tossed out of his Southern California town by the "proper" citizens. Drafted into the army, Benny is killed in action--and now that he's a hero, his old home town gears up for a Congressional Medal of Honor ceremony. Suddenly the same upright townsfolk who'd previously scorned Benny and his impoverished father (J. Carroll Naish) bend over backward to prove how much they "loved" the boy. Only Dorothy Lamour, playing Benny's former sweetheart, sees through the sham, though she's honor bound to celebrate Benny's heroism. A Medal for Benny bestows top billing upon Lamour, but the film's true star is J. Carroll Naish as Benny's volatile Italian papa--a performance which won Naish an Academy Award nomination.

Grant Mitchell
as Mayor of Pantera

Jimmie Dundee
as Cop
View All

Critic Reviews for A Medal for Benny

By today's standards, this small-town melodrama about hypocrisy, based on John Steinbeck's writing, is sentimental, but it made an impression when originally made.

There are no featured reviews for A Medal for Benny at this time.

A Medal for Benny Quotes