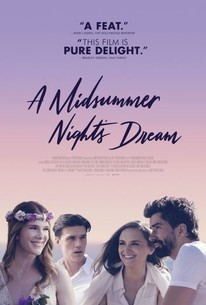 A Midsummer Night's Dream is one of Shakespeare's most beloved creations. The frolicking tale of lovesick young aristocrats, energetic but inept rustics, and mischievous woodland spirits is a staple of stage and screen. In the past, filmed adaptions have emphasized the play's traditional, Elizabethan qualities. This production, however, is a fresh and stylish reinvention that takes an entirely different approach. The story takes place in present day Hollywood -- a place where glamorous stars, commanding moguls, starving artists and vaulting pretenders all vie to get ahead. Hollywood is sometimes called "The Dream Factory," and like the world of Shakespeare's Dream, it's a place where fantasy and reality collide. In the tradition of Baz Luhrmann's rapturous re-imagining of Romeo + Juliet, this modern vision breathes new life into a classic tale. Combined with a cast of established and emerging stars, as well as a pulsing original soundtrack, the film will appeal to ardent fans of the Bard as well as audiences discovering Shakespeare for the first time.

Finn Wittrock
as Demetrius
View All

This "Midsummer" is a chore.

Whether you are amused or bemused, it's unlikely that you'll feel much of anything; this is comedy at its frothiest and foamiest.

If you're hoping to see a production just like the one that would have been done in 1596, this ain't it. But Mott's version is a hell of a good time in its own right.

Mott's "Midsummer Night's Dream" may not have a high bar to reach to be better than average as filmed Shakespearean comedies go. But by any standard, it's a modest, resourceful and unexpected delight.

ultimately can't reconcile the distracting awkwardness that comes with placing these characters and dialogue into this setting. The result feels lost in translation.

Though no one stands out in the ensemble, everyone does a fantastic job of wrapping their mouths around Shakespeare's dialogue and giving it a present-day spin.

They break some cardinal rules here, all in service of the show. It is the sort of creative latitude Shakespeare would admire.

Even if you never read a word of Shakespeare, this fresh update lets the ornate language flow around you so you can just sit back and enjoy the show.

Casey Wilder Mott's delightful modern day version of Shakespeare's work is perhaps the punniest, most meta adaptation of the bard's output to date.

There are no featured audience reviews yet. Click the link below to see what others say about A Midsummer Night's Dream!