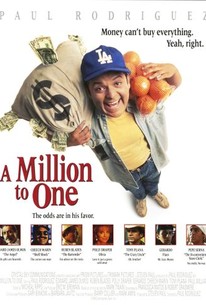 A Million to Juan Photos

This comedy, set in the barrios East L.A. is loosely based upon Mark Twain's parable The Million Pound Bank Note. The new version tells the tale of Juan Lopez a nice, but uneducated hombre trying to earn enough money to support his little boy. Though Juan was born in the States, he lacks proper documentation and is sent back to Mexico. Now he sells oranges at an intersection. His life looks hopeless when a limousine pulls up and he is handed an envelope containing a check for one million dollars. He is told that he has one month. If he uses the money correctly he will get an award. Juan is suspicious and takes it to his immigration worker who encourages him to check it out. A Beverly Hills banker almost has apoplexy upon examining the check and Juan knows he has the real thing. Now the good-hearted Juan must avoid the temptations, and the greedy people that suddenly surround him.

Dianna Miranda
as Waitress at Party

Cher Lynn
as Blonde in Porsche

Deborah Benson-Wald
as Woman at Party

Critic Reviews for A Million to Juan

There are no critic reviews yet for A Million to Juan. Keep checking Rotten Tomatoes for updates!

Audience Reviews for A Million to Juan

I remember this film and I can't help but love it.

A Million to Juan Quotes