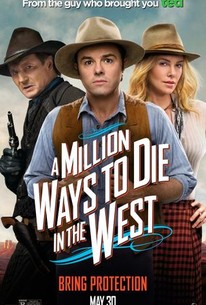 Critics Consensus: While it offers a few laughs and boasts a talented cast, Seth MacFarlane's overlong, aimless A Million Ways to Die in the West is a disappointingly scattershot affair.

Critics Consensus: While it offers a few laughs and boasts a talented cast, Seth MacFarlane's overlong, aimless A Million Ways to Die in the West is a disappointingly scattershot affair.

Critic Consensus: While it offers a few laughs and boasts a talented cast, Seth MacFarlane's overlong, aimless A Million Ways to Die in the West is a disappointingly scattershot affair.

A Million Ways to Die in the West Videos

A Million Ways to Die in the West Photos

Seth MacFarlane directs, produces, co-writes and plays the role of the cowardly sheep farmer Albert in A Million Ways to Die in the West. After Albert backs out of a gunfight, his fickle girlfriend leaves him for another man. When a mysterious and beautiful woman rides into town, she helps him find his courage and they begin to fall in love. But when her husband, a notorious outlaw, arrives seeking revenge, the farmer must put his newfound courage to the test. Starring alongside MacFarlane are Oscar (R) winner Charlize Theron, Liam Neeson, Amanda Seyfried, Giovanni Ribisi, Sarah Silverman and Neil Patrick Harris. MacFarlane reunites many of the filmmakers behind Universal and MRC's hit film Ted including Scott Stuber (Bluegrass Films) and Jason Clark who produce, and Wellesley Wild and Alec Sulkin who co-wrote the script. (c)Universal

Ewan McGregor
as Cowboy at Fair

Alec Sulkin
as Guy at Fair

Tatanka Means
as Other Apache

Bob Jesser
as Cowboy at Table

Jackamoe Buzzell
as Other Cowboy
View All

Critic Reviews for A Million Ways to Die in the West

The one person who gets the balance right, weighing parody and homage, is the composer, Joel McNeely, whose opening theme stirs hopes and memories that the movie cannot match.

"A Million Ways To Die In The West" may remind MacFarlane's core audience of what they're missing by not having Westerns as part of their regular movie menu.

It's essentially Blazing Saddles, only the fart jokes aren't quite as fresh.

A Million Ways to Die in the West feels like about 80 minutes of material was padded out to 110 minutes.

Fart jokes are all too plentiful, along with copious references to bodily fluids, but in this zany context the film gets away with them. And the screenplay is crammed with witty lines. The western lives on.

The problem isn't just that MacFarlane is a bad actor, but that Anna's character makes absolutely no sense.

McFarlane's movie does have at least one classic moment that will appeal to Generation Xers and the most undignified duel ever, but it doesn't have much sardonic resonance.

There are quite possibly a million reasons why Seth MacFarlane's second movie A Millions Ways to Die in the West is not a good movie, but you only need one: it's not funny.

A Million Ways to Die in the West is an awkwardly paced, overly long, and wildly uneven film.

Surface laughs will only carry you so far, and there has to be something more substantial in a movie this long, but there isn't anything.

While it does suffer from the old syndrome of most of the funny parts being in the trailer, there are still plenty of funny jokes that weren't. Unfortunately, there still aren't enough funny jokes to fill the movie's runtime.

Audience Reviews for A Million Ways to Die in the West

With a kind of clever (and really funny) humor that may not appeal to everyone's tastes, MacFarlane finds the perfect balance between slapstick nonsense and raunchy scatology (he knows how to make excrement jokes hilarious), while exploring the gorgeous sight of the landscapes.

So this would be Seth MacFarlane's own comedy western version (or should I say attempt) of 'Blazing Saddles' or 'City Slickers' with his trademark Family Guy tomfoolery all in an uneasy marriage. The movies title does sound intriguing that's for sure, hell its actually a great title...but it could also be summed up quite easily in a 30 minute TV episode or maybe even a comedy sketch. This really is a one trick pony I'm afraid. The plot isn't worth discussing as it simply involves MacFarlane playing the useless underdog against a rough tough cowboy and his band of merry men. In the middle is the blonde damsel in distress played by Theron who naturally falls for MacFarlane as things proceed and we make our way to the inevitably predictable stand off at high noon. Its the basic western theme with the basic western setups and scenarios along side the reasonably amusing notion of how easy it was to get killed in the wild west...briefly touched upon in places. The film just felt like a spin off from Family Guy, almost like a live action version with 'Brian'. As MacFarlane provides the voice of Brian in his animated show it just feels like you're watching Brian in the wild west. The comedy plays out exactly as it does in Family Guy, you get the plot interspersed with the odd joke or visual gag that may or may not have anything to do with the plot. For instance right in the middle of the movie MacFarlane's characters stumbles across a barn and finds 'Doc Brown' working on his Delorean. Now I will admit its a nice little visual moment and both Christopher Lloyd and the car looked great...but its completely off the wall and had nothing to do with the actual movie!...just like MacFarlane's animated show. I really must stop comparing this movie to that animated show but you understand its very hard. The humour is of course as you would expect with lots of toilet gags and slapstick, lots fart and poo gags, much sexual references, sexism, racism, black humour, offensive bits...and then there's some good old fashioned lunacy and visual jiggery pokery. End of the day its quintessentially MacFarlane, you either love it or hate it which isn't necessarily a bad thing but you just feel like its dated already. There are some things in there that did make me laugh...or at least giggle, some good lines of dialog here and there. Overall most of it misfires, seems childish amateurish or just plain dumb admittedly but there are still some accurate strikes from the comedy bomber. I liked the spiel about old fashioned photo's and folk never smiling, the various ways people could die back in this era, the bad state of medicine at the time and the way Ribisi's prostitute girlfriend casually acts about her career. 'shoot that dirty cowboy cum all over my face!!' One thing the film does have and that's stunning location work. The movie really does look superb at every turn with the eye popping New Mexico backdrops. Some (most) of the acting scenes are outdone by the incredible landscapes we see behind the stars. Its far more interesting to look at the rugged desolate beauty of nature instead of Theron and MacFarlane trying to shoot bottles or MacFarlane trying to chat up Theron. Seriously am I the only one who thought that? is it me or is this guy clearly trying to flirt with Theron in some of these scenes? we all know he wrote himself the best part of course. Oh and what's with all the pointless non-dialog cameos? just because he could get these big names? I get that MacFarlane has tried to make a sort of old fashioned western comedy mixed with his own unique blend of humour here...the classic credit fonts, the obligatory meeting with Indians, the old cliched good guy coming up trumps in the end routine after dealing with moustache twirling enemies (literately) and dirty dark coloured attire wearing bad cowboys etc...I think we all knew it would be a satire and parody of sorts...but I guess everyone just kinda thought it would be funnier or a bit more ingenious than just shit jokes. MacFarlane is clearly not a leading man, I don't think anyone had the balls to tell him this. He ain't got the looks, he ain't got any sort of physique and strangely enough he can't quite pull off visual tomfoolery (neither can Theron, comedy ain't her thing). He does have an excellent voice though and that's his best weapon, we don't need to see you MacFarlane, just hear you. The movie looks outstanding in almost every scene no doubting that, the idea had promise, there are some good bits...but generally this feels like a very scattershot affair. The lighting has not been bottled here, hit and miss, now get off your high horse MacFarlane.

A misguided farce whose best parts were probably ruined by the trailers, and whose other parts were ruined by just not being funny. MacFarlane's comedic voice is very much present and still has some laughs to offer, especially this impressive cast, but this film is ultimately one of the bigger misfires of the year.

A Million Ways to Die in the West Quotes