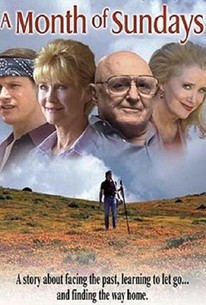 A Month of Sundays Photos

A small town baseball announcer embarks on the journey of a lifetime after facing the prospect of being placed in a retirement home against his will in this bittersweet drama featuring Academy Award-winning actor Rod Steiger in his final film role. Despite the fact that his health is fading, and having recently suffered a mild stroke, Charlie McCabe is reluctant to give up his announcing position for the local baseball team and settle quietly into a local nursing home. Recalling an unfulfilled promise that he had made to his late wife that he would make amends with his estranged son, Charlie and his loving granddaughter Biddy set out to make good on his word and lay old ghosts to rest.

Critic Reviews for A Month of Sundays

There are no critic reviews yet for A Month of Sundays. Keep checking Rotten Tomatoes for updates!

Audience Reviews for A Month of Sundays

This is a pretty cute film, something you might see on Hallmark Channel. About a Grandfather who has a heart attack, 4 years before he lost his wife, and he promised her he would find there lost son. So he sets off to find him, but little to his want he has the help of his granddaughter and 7 year old grandson. A very touching story. 3 1/2 stars I'm sure you ladies will enjoy it and rate it higher. Jamie Farr makes an appearance. Along with Not so skinny Sally Struthers.

A Month of Sundays Quotes