A Most Beautiful Thing2020 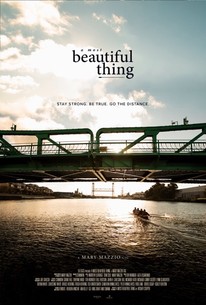 A Most Beautiful Thing Videos

A Most Beautiful Thing Photos

Called one of the best documentaries to unveil at South by Southwest by Brian Tallerico of Roger Ebert, A MOST BEAUTIFUL THING, narrated by the Academy-Award/Grammy-winning artist, Common; executive-produced by NBA Stars Grant Hill and Dwyane Wade along with Grammy-award winning producer 9th Wonder; and directed by award-winning filmmaker (and Olympic rower) Mary Mazzio, chronicles the first African American high school rowing team in this country (made up of young men, many of whom were in rival gangs from the West Side of Chicago), all coming together to row in the same boat. An amazing story.

Anita DeFrantz
as Self

Alvin Ross
as Self

Arne Duncan
as Self

Malcolm Hawkins
as Self

News & Interviews for A Most Beautiful Thing

View All A Most Beautiful Thing News

Critic Reviews for A Most Beautiful Thing

We can feel our hearts hurting and soaring at the same time.

This is a film that every child in the city of Chicago needs to watch because we are all in the same boat.

Its humanity and optimism remain powerful.

An evocative hip-hop score, poetic narration by Common and crisp graphics appropriately underline the timeliness of the film.

The film's fast-paced editing makes it difficult to get to know individual members, but the men register powerfully as a collective, just like a real rowing team.

Powerfully demonstrates the healing potential of sports and the ways it can help bridge societal divides.

This is a very compelling film and a very timely one.

While it has the heart of a fairy tale it isn't really one: It's a dream realized, American folklore that is alive, because the Manley Crew Team never would've known what magic they could create with a boat until they were introduced to one...

[It] couldn't be more topical or inspirational in light of the current Black Lives Matter movement and calls for police accountability and reform.

There are no featured reviews for A Most Beautiful Thing at this time.

A Most Beautiful Thing Quotes