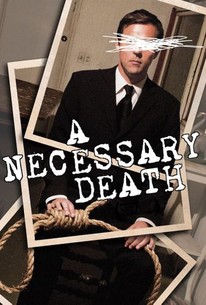 A young director's first feature becomes a literal matter of life and death in this independent drama. Gilbert (Gilbert John Echternkamp) is a film student who has come up with a novel idea for his final thesis project -- he wants to find someone who has decided to kill themselves, and follow them through the final days of their life until they commit suicide. Gilbert posts a message on the internet looking for a suitable subject, and after interviewing a handful of people with their own reasons for taking their life, he chooses a British expatriate (Matt Tilley) who is slowly dying of an inoperable brain tumor and wants to end it all before pain makes his life unbearable. It's important to Gilbert that his subject actually kills himself, believing that it would call the integrity of the film into question if they changed their mind. But as filming goes on, everyone involved becomes aware of the way the creative process is impacting the man's road towards death. A Necessary Death received its world premiere at the 2008 South by Southwest Film Festival. ~ Mark Deming, Rovi

Critic Reviews for A Necessary Death

These are daring, challenging themes for a young filmmaker and Stamm proves to be adept at playing with ideas that scare away writer/directors with twice as much experience.

A Necessary Death presents a wholly original, fascinating and curiously terrifying documentary that's likely to either captivate or revolt audiences.

'A Necessary Death' treats the topic of sucide in a disturbing yet creative way. This is a shocking, emotionally powerful film.

An experimental faux documentary on the unpleasant subject matter of suicide.

A Necessary Death takes a hot button issue - suicide - and expands it to reveal the fuzzy line between art and morality.

A Necessary Death will make you squirm and think in equal measure. For my money, that makes it a picture worth paying attention to.

a gripping tale that raises troubling questions about the nature of art and our voyeuristic society.

A Necessary Death, despite its provocations, remains timid and dramatized, ultimately favoring plot machinations to considering the issue of suicide more deeply.

As much as it doesn't seem like you're watching an intricate plot unfold, there's actually so much going on -- all of it layered; structured brilliantly.

Stamm is able to diminish our misgivings over its authenticity by mastering the "documentary of a documentary" style and satisfying the gravity of the drama through situations that have more truth to them than a lot of staged situations in non-fiction.

A thoroughly engrossing little film that's also quite slyly entertaining, despite its rather unsavory subject matter.

Audience Reviews for A Necessary Death

There are no featured audience reviews yet. Click the link below to see what others say about A Necessary Death!