A Night for Dying Tigers2010 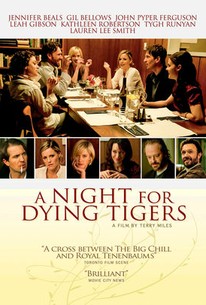 A Night for Dying Tigers Photos

An unusual family reunion brings out the worst in everyone in this darkly witty comedy-drama from writer and director Terry Miles. Ever since the death of his parents, Jack (Gil Bellows) has been the unofficial patriarch of his family, and so when he asks his younger siblings to join him for a going away party, they all agree to attend. However, the reason Jack is going away is he's been sentenced to five years in prison after being found guilt of manslaughter, and while his wife Melanie (Jennifer Beals), a successful photographer, loyally stands beside him, the victim was raping Jack's mistress at the time of the attack. Not that Jack's siblings are any less confused about life. Russell (John Pyper-Ferguson) is a published author and English professor who has left his wife for attractive graduate student Carly (Leah Gibson), and Patrick (Tygh Runyan) is a filmmaker whose recent success has only fueled his considerable arrogance, though he can't bear to break off his long-standing affair with Karen (Lauren Lee Smith), his emotionally unstable adopted sister. A Night For Dying Tigers was an official selection at the 2010 Toronto International Film Festival. ~ Mark Deming, Rovi

Critic Reviews for A Night for Dying Tigers

There are no critic reviews yet for A Night for Dying Tigers. Keep checking Rotten Tomatoes for updates!

Audience Reviews for A Night for Dying Tigers

There are no featured audience reviews yet. Click the link below to see what others say about A Night for Dying Tigers!

A Night for Dying Tigers Quotes