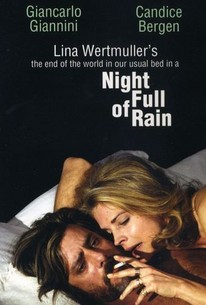 A Night Full of Rain Photos

Fine del Mondo nel Nostro Solito Letto in una Notte Piena di Pioggia, literally translated as "The End of the World in Our Usual Bed in a Night Full of Rain," was also released as Night Full of Rain. This film is director Lina Wertmuller's English-language film-debut. The poor critical and box-office reception to this film marked the beginning of a difficult period for director Wertmuller. In the story, Italian newsman Paolo (Giancarlo Giannini) rescues the American photojournalist Lizzy (Candice Bergen) from a brawl while she is in Italy. He also tries, less than successfully, to seduce her. When they meet again in San Francisco, the sparks between them lead to love. He is an old-guard Italian communist who wants his wife to stay at home and tend to the laundry and the cooking. Lizzy is an emerging feminist, and wants to make a contribution to that movement. Though their differences lead to some noisy confrontations, they are able to talk them through.

Michael Tucker (I)
as Friend

Critic Reviews for A Night Full of Rain

There are no critic reviews yet for A Night Full of Rain. Keep checking Rotten Tomatoes for updates!

There are no featured reviews for A Night Full of Rain at this time.

A Night Full of Rain Quotes