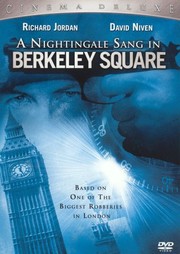 A Nightingale Sang in Berkeley Square (The Big Scam)

A Nightingale Sang in Berkeley Square (The Big Scam) Reviews

Paul D
½ December 7, 2018
The production has a roughness about it, but as a crime caper it flows well.

mark s
October 14, 2017
Just seen this for first time and really enjoyed great acting and superb locations. This was a dire period for British cinema, but this unpretentious film captures London of the time beautifully.

Super Reviewer
jay n
September 6, 2013
Blah caper film is overlong without a clear vision of the story it wants to tell and wastes most of its cast. Elke has a nothing part as does Gloria Grahame, who looks the worst she may have in this film. Nice title for a lackluster film.

Stephen C
February 29, 2012
When i was around 10 years old this film was on TV during the school holidays when i remember it being Called The Biggest Bank robbery amongst other titles.
Regardless of its many titles this film is a little gem and while its not wholly original it does enough to pass the time.

Pinky Green wants to go straight after a stretch in prison ,but unfortunatley his new job as a banks handyman lands him in the sights of Ivan the terrible a local gangster played wondefully by David Niven.

Ivan plans to rob the bank and its up to Pinky to get all the details so the gang can make good on thier robbery.

The film is fun once you accept Niven as A gangster and his performance is the right side of suave menace to pull it off.
Jordan is execellent as Pinky who wants to go straight but becomes drwan back in to his old life.
Oliver Tobias and Richard Johnson are also on hand to lend sterling support in the acting stakes.

The gang Ivan assembles all have great names like Charlie the Chubb ,Sid The Yid,Pealer Bell and Stan the spinner,and the robbery is deftly handled.

A good film then and one that entertains right down the line.