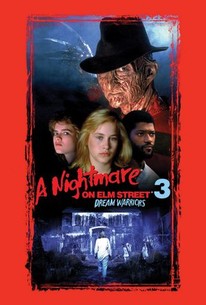 Critics Consensus: A Nightmare on Elm Street 3: Dream Warriors offers an imaginative and surprisingly satisfying rebound for a franchise already starting to succumb to sequelitis.

Critics Consensus: A Nightmare on Elm Street 3: Dream Warriors offers an imaginative and surprisingly satisfying rebound for a franchise already starting to succumb to sequelitis.

Critic Consensus: A Nightmare on Elm Street 3: Dream Warriors offers an imaginative and surprisingly satisfying rebound for a franchise already starting to succumb to sequelitis.

The best of the Elm Street sequels, this creepy, surreal fantasy features terrific effects, a fine young cast, and an air of grim fatalism that sets it apart from its giggly successors. Patricia Arquette stars as Kristen, whose nightmare leads to a slashed wrist which looks suspiciously like a suicide attempt. She is placed in a hospital psychiatric ward with a group of six other troubled teens who all dream about the same horribly burned man (Robert Englund) trying to kill them. Perhaps the most unusual thing about this picture, however, is the unexpected depth of sadness running through it. There are some achingly sweet moments in this otherwise frightening film which, though not disruptive, are impossible to analyze. The first and most bizarre of these is Heather Langenkamp's entrance, which inexplicably causes most viewers to get misty-eyed, and there are several similar scenes throughout the film. One answer can be found in the sensitive direction of Chuck Russell, who emphasizes the tragedy and utter hopelessness in these kids' lives and manages to wring some unexpectedly perceptive turns from his cast. This is a film in which a great deal of care was obviously lavished on individual scenes (the sets are outstanding) and performances. The results are well worth repeated viewings, and prove that sequels don't necessarily have to be inferior films. ~ Robert Firsching, Rovi

Ira Heiden
as Will

Jack Shea
as Priest at Funeral

Michael Rougas
as Priest in Church

Dick Cavett
as Himself

Melanie Doctors
as Girl in Cemetery
View All

News & Interviews for A Nightmare on Elm Street 3: Dream Warriors

View All A Nightmare on Elm Street 3: Dream Warriors News

Critic Reviews for A Nightmare on Elm Street 3: Dream Warriors

The franchise's third (and best) entry...

Arguably the most imaginative of the horror franchise, with a fair number of truly resonant scenes.

Debuting director Chuck Russell elicits poor performances from most of his thesps, making it difficult to differentiate between pic's comic relief and unintended howlers.

A creepy score and Russell's sure grasp of the skewed logic of nightmares helps to sustain the ambiguity between the 'real' and 'dream' worlds, while Englund's Freddie now fits like a glove.

The film's dream sequences are ingenious, and they feature some remarkable nightmare images and special effects.

This is filmmaking by the numbers, without soul.

Somehow A Nightmare on Elm Street 3: Dream Warriors has always been just a bit more enjoyable than the typical horror sequel.

It's a shame this is about as good as it got for the series...

...the mental-hospital setting [is] certainly a refreshing change from the suburban atmosphere that dominated the first two films.

Audience Reviews for A Nightmare on Elm Street 3: Dream Warriors

Great for its time and Freddy Kruger will always be a classic character!

Pretty lame, in all honesty. Was looking forward to this one as it brings Nancy's character back in, but it still wasn't that good. Maybe my expectations were too high, but pity help me, I still have three elm movies left in my box set!

Alright, that's it, this is the last Elm St. movie I ever want to see! Here I thought that after that horrendous second movie this one would be worse, but no, it was terrifying, and I went back to my nightmares with Freddy. The original scream queen Langenkamp, who played Nancy in the first movie, returns to help teenagers fight Freddy. Just like in the first one, the teens try to stay awake, and we are unaware of when they accidentally fall asleep only to be killed in some crazy way. I loved that they all tried to band together using their dream powers to fight him, it was very exciting. I really liked this movie, although it scared the socks off me.

This is probably my favorite entry in the series. "Dream Warriors" thankfully rebounds from the ridiculous "Freddy's Revenge", and actually advances the concepts presented in the original. The most notable creative progressions are the dream sequences. The imagery involved is disturbing, and instead of just random slashing, Freddy tortures the innocent using the victim's hopes and fears. Freddy was still meant to be scary in this movie, so his warped sense of humor works nicely. This is the sequel that was most imitated in the watered down movies to follow. It's a movie from the 80's so it is corny in parts, but it is a very good horror movie. Highest possible recommendation.