A Nightmare on Elm Street 5: The Dream Child1989 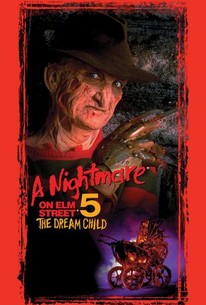 Critics Consensus: A Nightmare on Elm Street feels exhausted by this cheesy fifth entry, bogged down by a convoluted mythology while showing none of the chilling technique that kicked off the franchise.

Critics Consensus: A Nightmare on Elm Street feels exhausted by this cheesy fifth entry, bogged down by a convoluted mythology while showing none of the chilling technique that kicked off the franchise.

Critic Consensus: A Nightmare on Elm Street feels exhausted by this cheesy fifth entry, bogged down by a convoluted mythology while showing none of the chilling technique that kicked off the franchise.

A Nightmare on Elm Street 5: The Dream Child Photos

In the fifth installment in the Nightmare on Elm Street series, Alice (Lisa Wilcox) begins the film with the notion that she is safe after she vanquished the evil Freddy Krueger (Robert Englund) by learning how to battle the dreamworld psychopath within her own unconscious mind. But somehow Freddy has survived, and Alice discovers that he's found a place where Alice can't protect herself when he taps into the dreams of her unborn child. Freddy is soon leaving a trail of destruction while the child is still in the womb, and he will become even more deadly when the child comes to term. Memorable moments include Freddy's attack on a comic book artist and his Hellish experiences when "the bastard son of a hundred maniacs" is locked in an insane asylum with a nun. A Nightmare on Elm Street 5: The Dream Child was followed by Freddy's Dead: The Final Nightmare, though Mr. Krueger popped up again in Wes Craven's New Nighmare. ~ Mark Deming, Rovi

Stacey Elliott
as Girl in Locker

Will Egan
as Semi-Truck Driver

Wally George
as Himself

Marc Siegler
as Thirty-Something
View All

News & Interviews for A Nightmare on Elm Street 5: The Dream Child

View All A Nightmare on Elm Street 5: The Dream Child News

Critic Reviews for A Nightmare on Elm Street 5: The Dream Child

Despite an impressive bag of special effects tricks, old Fred is starting to resemble one of those dead horses that studio execs insist on flogging.

The series here takes a depressing nosedive into zero-degree filmmaking.

A flimsily plotted but visually impressive addition to the endless Freddy Krueger saga.

A genre film that won't totally insult your intelligence or your eyes.

As for Englund, he still looks as if he's been working at Domino's too long, and he still sounds as if he's stealing his material from Don Rickles.

Even though the transitioning into nightmares is still admittedly amusing, the specific scary visions, based on individual fears, are rarely terrifying.

Freddy needs to become a daddy in this gory and gothic sequel to the nightmare adventures that seemed impossible to end. [Full review in Spanish]

Don't wait for this one to come out on video-see it in the theatre and sit close to the screen. Roller coasters are always better at the front.

At the end of the day while it does little to progress the mythos, it's still an enjoyable entry in to the series that entertains consistently.

The progressively convoluted nature of its storyline ultimately stands as A Nightmare on Elm Street: The Dream Child's most egregious failing...

Director Stephen Hopkins does an imaginative job in visualizing the bizarre, freely associative nightmares and produces some memorably surrealistic scenes.

Audience Reviews for A Nightmare on Elm Street 5: The Dream Child

The Dream Child is my least favorite in the whole series. Stephen Hopkins is a horrible director. I was so disappointed with part 5. Good performances, good effects, but bad script and bad story. Freddy's jokes are even funny this time. Everything in this movie is just so backwards, awkward and weird (even the death scenes are way too awkward). It doesn't fit the series too well. Part 5 is like Freddy Krueger's own nightmare when he's on acid. But not all acid trips are good and most nightmares don't make much sense. You put those two together you have a pretty lame perception. Stephen Hopkins should have been banned from this series. Not bloody (just weird), not funny (just weird), not scary (just weird)...but slightly entertaining. Still, that just isn't enough. 2 stars for effects and good performances (only if they had a better script).

Even though every Nightmare film has tried something new in the past, this one really doesn't offer anything much. However this film does have great moments and is still very enjoyable, but compared to Dream Warriors and The Dream Master, this is one of the weaker one, still enjoyable however. But it really doesn't anything new or creative. There's still a lot of originality present in the film with the death and dream sequences, but there's a little something lacking to make this film truly special, and memorable. Freddy seems a bit bored this time around, and so do the characters. Overall Nightmare On Elm Street: The Dream Child is a good little film to watch, but with nothing really new to add to the series.

Not too bad. Some of the better death scenes in the series. Freddy also got a bigger role, which is never a bad thing. I think that the series tended to get a little bland after part 2, but still fun.

A Nightmare on Elm Street 5: The Dream Child Quotes