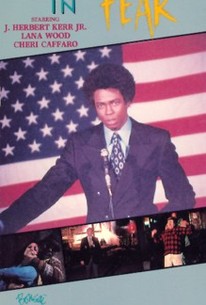 The film takes place during a heated political campaign, wherein the "race card" is played up for all it's worth. The bigoted whites attack the blacks, the militant blacks attack the whites, and gallons of blood are spilled. A candidate's mistress is kidnapped and murdered in a particularly repulsive fashion.

There are no critic reviews yet for A Place Called Today. Keep checking Rotten Tomatoes for updates!

There are no featured reviews for A Place Called Today at this time.