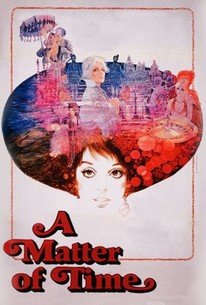 A Matter of Time Photos

Singer and actress Liza Minnelli teamed up with her father, legendary director Vincente Minnelli, to make this evocative drama. Nina (Liza Minnelli) is a popular film star who, in the midst of a press conference, finds herself remembering her life before her big break, when she worked as a chambermaid at an Italian hotel which had seen better days. In the course of her duties, Nina meets Countessa Sanziani (Ingrid Bergman), an aging and eccentric woman who regales Nina with tales of her glamorous younger days. As the Countessa tells her more stories of her days of wealth and adventure, Nina imagines herself living out the same exciting stories, and soon the Countessa encourages her to find the courage to live out her own dreams. A Matter Of Time also featured another family team-up; Ingrid Bergman's daughter Isabella Rossellini has a small part as a nun attending to the ailing Countessa.

Critic Reviews for A Matter of Time

The movie just doesn't hold together... And yet we sit in this failed movie and give our attention to Ingrid Bergman, and there is a certain consolation.

A bittersweet masterwork about the raging and frustrated passions of old age.

An embarrassment for all concerned.

This film is, such an embarrassment to everyone involved (except Bergman) that it makes Lucky Lady seem like Gone With The Wind.

A Matter of Time is not an exceptional movie, but it offers attractive elements, especially for Minnelli's unconditional fans. [Full Review in Spanish]

Vincente Minnelli disowned his last movie, A Matter of Time (1976), when it was taken away from him by its producers, American International Pictures, and after its initial release it pretty much disappeared from view.

Minnelli's very last film stars his own daughter Liza (their only collaboration) as an awestruck chamber maid inspired by the adventures of an aging contessa (Ingrid Berman) to embark on her own fantasy journey.

Audience Reviews for A Matter of Time

So much talent behind and in front of the camera to lay such a big egg. The whole thing reeks of decay and that seeps into the tenor of the film. Liza is all over the place and only registers in a positive way twice, in the final hospital scene and most of all during the musical performance of the song Do It Again-really her only powerful moment. Of interest more for its cast of second generation performers than any merit or entertainment value of the actual film. Beside Liza there's a brief appearance of Isabella Rossellini in her screen bow and as Liza's cousin Tina Aumont, who was the daughter of B movie star Maria Montez and Jean-Pierre Aumont. Nonsensical mess was the unfortunate swan song of both Vincente Minnelli and Charles Boyer. Such a missed opportunity.

A Matter of Time Quotes