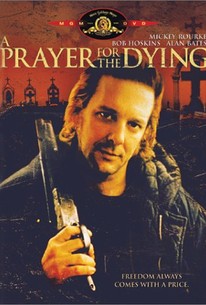 A Prayer for the Dying Photos

A man struggling to escape the political unrest of Northern Ireland finds that his violent past still follows him in this drama. Martin Fallon (Mickey Rourke) is a terrorist with the Irish Republican Army who, while attempting to blow up a British military transport, accidentally bombs a bus full of schoolchildren. The incident haunts Fallon, who decides to quit the IRA and escape to London. Fallon wants to relocate to America, but he lacks a passport, and his criminal past would prevent him from getting one. Jack Meehan (Alan Bates), a British gangster who knows about Fallon's past, offers him a deal -- he can get Fallon the papers and the cash to go to America, but in return he must kill a man. A priest, Father De Costa (Bob Hoskins), witnesses Fallon committing the murder, and Fallon wants to find a way to keep De Costa quiet without putting more blood on his hands. The original director of A Prayer for the Dying, Franc Roddam, left the production midway through shooting due to disputes with the producers, and star Mickey Rourke later attempted to disassociate himself from the film.

Norman Warwick
as Priest
View All

Critic Reviews for A Prayer for the Dying

A ludicrous movie about a subject that deserves more serious treatment.

Mickey Rourke's performance is key in buying the story, whose gestures and look are prolonged in his peculiar Irish intonation and accent. [Full Review in Spanish]

It is almost inexplicable how dull and sodden a melodrama A Prayer for the Dying -- about an IRA terrorist in London -- manages to be.

The good intentions seem frivolous and what starts out to be a study of a senseless violence in Northern Ireland ends in a senseless study of troubled personalities.

Muses on the difficulty once violent men have in ridding themselves of the mark of Cain.

"it's in need of salvation"

Audience Reviews for A Prayer for the Dying

This above average thriller is rife with ludicrous performances and ripe in symbolism, even down to the blind girl Mickey Rourke falls for. Almost worth it for Bob Hoskins as a priest beating someone over the head with a dustbin lid!

A Prayer for the Dying Quotes